In Toronto, the death rattle of summer is marked in an unusual way. Its signalled by a crescendo of rumbling. 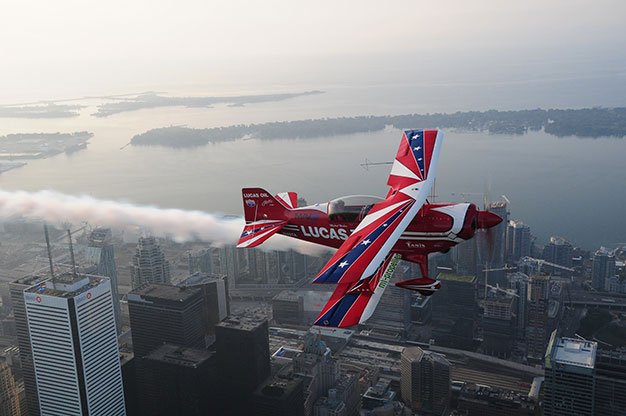 The air show returns Labour Day long weekend, and Torontonians wants you to know how much they hate it.

In Toronto, the death rattle of summer is marked in an unusual way. Its signalled by a crescendo of rumbling overhead, a whooshing sound of jets too close for comfort, sending vibrations throughout the city and cats clawing up walls. Its the Canadian International Air Show.

As its Wikipedia page states, the annual air show, presented by the CNE, has been tormenting local residents and ruining the last long weekend of the summer since 1949. It began as a show-and-tell for de Havilland Aircraft of Canada, an aircraft manufacturer founded in the 20s. When the event outgrew its North York location, it relocated to Torontos waterfront and joined forces with the CNE.

Of course, there are lots of people who like it. Thousands of local residents and out-of-towners flock to Lake Ontario over Labour Day long weekend to watch fighter jets dip and dive in formation. People pay good money to see this, too. VIP Flight Deck tickets promising hours of heart-stopping aviation excitement are $250.

But Torontonians on social media dont seem to share the same excitement. In fact, within the hour of the first sounds of jets overhead on September 2, most people were Tweeting their hatred for the airshow (#airshow is now trending on Twitter). Below, weve collected 10 of the most angry air show tweets.

Do these people make a good point? Is the air show outdated, traumatic for residents whove moved from war zones and just a huge waste of money?

And just to lighten the mood, if youre on Twitter anyways, you can follow the air show parody account @Toronto_AirShow, whose manager is clearly a top gun when it comes to onomatopoeias.

Welcome to Toronto, refugees. Don’t mind those shrieking war machines overhead. They’re just for show. #AirShow (I crack myself up.)

Hate, hate, hate the air show. One thing if you want to go and see them – another to have it inflicted on an entire city. #awful #pollution

Toronto Air Show: Lets entertain 200 old people and annoy the fuck out of the entire city. I hope their dogs have heart attacks.

i HATE the air show! fighter jets are not passenger planes… why must militarism be celebrated?!?! #IHateTheAirShow

And so it begins. The deafening sounds of the #airshow #warshow causing our cats to freak out and this baby in my belly to panic. Argh

I despise the air show. For the love of god when will we stop worshipping war machines? #HateThisWeekendSoDamnMuch

WHEN TORONTONIANS TAKE OVER TWITTER TO COMPLAIN HOW NOISE CONSTIPATES THEIR CATS!!

SHUT UP AND GET BACK TO FREELANCING!!