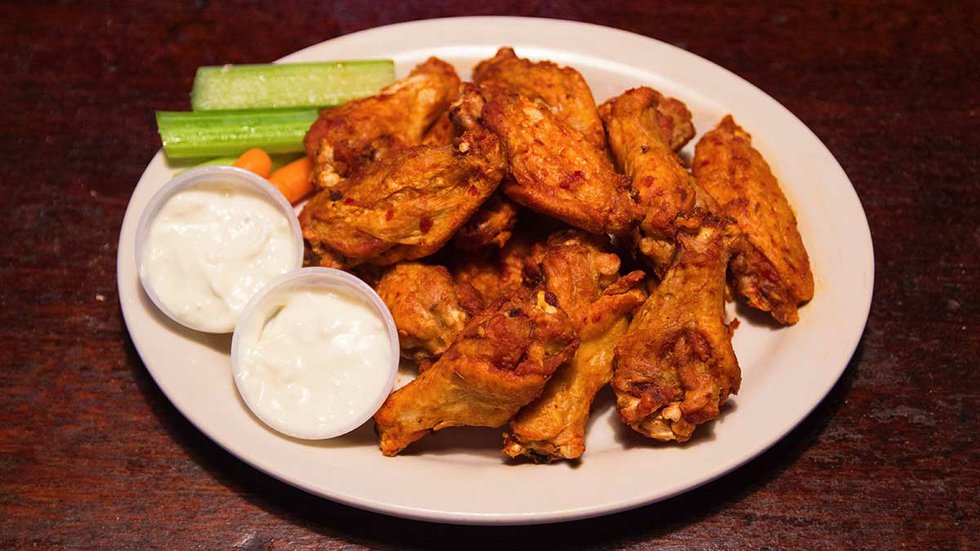 Chicken wings are one of the most versatile finger foods anywhere. There are plenty of ways to vary the experience of eating a plate of this pub standard – from sauce to cooking method to the selection of the chicken itself.

The Buffalo style of chicken wing was created in 1964 in – you guessed it – Buffalo. The city has embraced its namesake meat morsels with a newly launched Buffalo wing trail, which includes stops at 12 can’t-miss restaurants. Each takes a slightly different approach to making this dish and now that we have the wing trail, it’s easier than ever to find the best bites the next time you visit western New York state (about two hours by car!).

Anchor Bar | The birthplace of the Buffalo wing. Over 50 years ago, owner Teressa Bellissimo first came up with the idea of frying a batch of wings then tossing them in hot sauce to serve to her son’s friends. Anchor Bar dates back to the 1930s and you can still check out its original wooden bar.

Bar-Bill Tavern | Kitchen staff here use a paint brush to apply the housemade sauce to each wing. The menu is short and sweet and there’s a covered patio where you can nosh down your order. Or you can sit at the bar and join the Mug Club: for $50, you get a personalized mug that will always be at the bar waiting for you.

Blackthorn Restaurant | This Irish pub comes equipped with Celtic music and a menu that nods to the green, white and orange. The Buffalo wings are served with a little more kick and housemade blue cheese. The Blackthorn was the go-to place for wings for Buffalo legend Tim Russert, the late NBC broadcaster who grew up nearby.

Cole’s | There’s something über American about a restaurant with wall-to-wall memorabilia. Cole’s has been around for over 80 years and its décor includes an Olympic rowboat hanging from the rafters. The wing options here are plenty and they highlight the chef’s tastes for Asian cuisine.

Doc Sullivan’s | This pub has its own original wing named the “Smitty,” which features a blend of six spices plus hot sauce in a recipe that has continued for 40 years. Try Doc Sullivan’s combination of chicken wings with another of Buffalo’s favourite foods: beef on weck (roast beef on a kimmelweck roll with horseradish).

Duff’s | Hot wing nuts will want to check out Duff’s. Their spicy scale is not to be underestimated – and it was even the inspiration for a Saturday Night Live sketch in the 1990s featuring Christian Slater and the late Phil Hartman. President Obama himself visited Duff’s for a bite back in 2010.

Elmo’s Bar & Restaurant | A lot of the wings you get here can be double-dipped in sauce during the cooking process, which means kitchen staff fry the wings, sauce them, grill them, then sauce them again. You can mix-and-match sauces too. Check out the Cajun sauce and give a nod to the old Sabres jerseys on the walls.

Gabriel’s Gate | Located in Buffalo’s historic Allentown neighbourhood, Gabriel’s Gate caters to fans of the classic Buffalo wing. While you’re waiting for your order, you’ll notice the mounted animal heads inside, or head outside to chill by the fountain on the back patio.

Gene McCarthy’s | Ireland lovers are welcome in this pub, which features a Buffalo wing that combines blue cheese, hot and BBQ sauces – and also includes more blue cheese on the side. You won’t find ranch sauce here. Gene McCarthy’s was once the preferred watering hole for workers from nearby grain silos.

Glen Park Tavern | This Williamsville local has been around since 1887 and still features its original wooden bar. Wing-hungry patrons should order the appropriately named jumbo wings with housemade blue cheese dressing, or check out the Sicilian wing (Parmesan cheese, garlic, basil, oregano). It’s also a good sign that a majority of staff members have been there forever.

Lenox Grill | A few steps down into the Lenox and you can dine at “garden suite” level. This pub is in the basement of one of Buffalo’s oldest hotels and features a ridiculously long beer list (550 different bottles!). You can get wings well into the wee hours of the night. Weekly specials have included flavours like peanut butter and jelly.

Mammoser’s Tavern | Rather than use Frank’s hot sauce as the base for its wing flavouring, Mammoser’s made their own original sauce back in the ‘70s that includes four different kinds of peppers. Look closely and you’ll see that the bar has some of the original wood from the 19th-century stable that once stood here.

Hungry yet? Don’t forget to visit our contest page for a chance to win a Buffalo Wing Trail getaway!