159 Manning BBQ moves to the Tranzac

Our so-called Music City can't stop this fun from happening 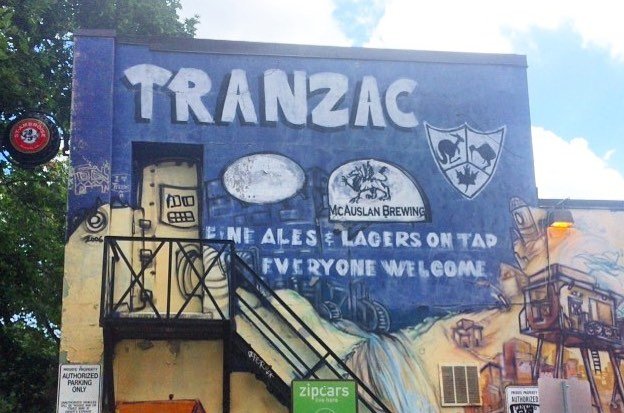 159 MANNING BBQ with ASUMAYA, LES NANANAS, SEVERAL FUTURES, ZORTON AND THE CANNIBALS, WAVE OF TERROR, GERMAPHOBES, KINK and many others at the Tranzac (292 Brunswick), Saturday (July 16), noon till 11 pm. $10 at the door.

The seventh annual 159 Manning BBQ has been saved.

The Tranzac Club at 292 Brunswick has stepped in to host the annual music and food party on Saturday, July 16, after it was cancelled by the city yesterday.

For six years, Tim McCready has thrown the hella fun, increasingly ambitious backyard party at his house, complete with myriad local and come-from-away bands in several rooms and on a backyard stage, barbecue eats, photo booths and tons of revelers.

All was a go for year seven until a neighbour lodged a complaint that led to the city stopping by the residential Dundas West home and cancelling the event.

“I had a music video for a DJ named REZZ shot at my place on July 7,” McCready tells NOW about what led to the complaint. “The production company placed a letter in 30-plus mailboxes on Manning and Euclid explaining what was going on, and to contact them if they had any questions or complaints. Filming took place inside for most of the day, until a short crowd scene was shot in the backyard from 9:45 pm until 10:30 pm. It wasn’t whisper-quiet, but it wasn’t excessively loud. The production team was off-site by 11 pm.

“Someone called the city and said that I was throwing a huge party that night and selling alcohol and charging cover, which I was not. They also directed them to the FB event for this Saturday’s BBQ and a lot of the media coverage I’ve received in the past.”

The officer from the municipal licensing and standards department told McCready she’d seen photos from past events and was surprised that there hadn’t been more complaints.

“It’s not like these parties have been a secret or like the city didn’t know about them before,” McCready says. “I’ve gotten away with things for so long because I’m doing something positive and I’m generally not making noise or causing problems in the neighbourhood 360 days a year. I honestly think 80 per cent of my neighbours enjoy what I bring to the neighbourhood. The problem now is one person just happens to be complaining loud enough, actively campaigning against me, that the city can’t turn a blind eye. I’m not sure how it’ll affect future events here.”

McCready says the Municipal Licensing and Standards officer said the department would be forced to charge his landlord and bring him to court if the 159 Manning party went ahead as planned. He phoned Councillor Mike Layton’s office for advice and Layton suggested he do unplugged performances in the backyard and not charge cover or sell alcohol.

“But cover is what pays for the party expenses,” argues McCready. “I’m a hand-to-mouth working musician and sound tech so I can’t just drop $3,000 on a BBQ like this from my pocket. I don’t need to turn a profit on it and I rarely have, but it takes money to throw a party at the level I am.”

He’s thankful for the Tranzac’s help, especially as the venue has multiple stages like 159 Manning. Other good news: the admission has been reduced from $20 to $10, and there will be free veggie burgers.