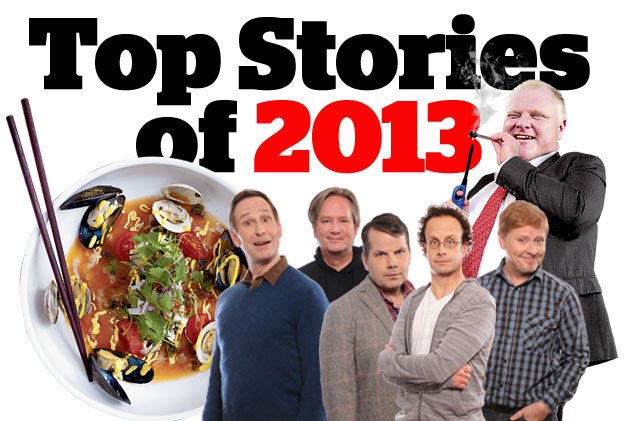 Here’s a roundup of some of our most-read stories of the year, based on web traffic, not forensic fingerprint evidence lifted from newsprint or something. Enjoy this heady trip down the winding roads and cul-de-sacs of memory lane.

“Oh boy, Doughboy! One bite of [chef Ben] Denham’s house-baked buns spread with porky pan drippings and you’ll understand why he calls them crack rolls. Sides are classics like collard greens and coleslaw – but all with that post-ironic twist – while desserts careen between atypically flavoured soft ice cream (e.g., bay leaf) and banana cream pies smushed into Mason-Dixon jars.” -Steven Davey on Grand Electric, which took the top spot in our best restos roundup last spring

Hall Pass: An Oral History Of The Kids In The Hall

“I thought about character. Sketch is usually so caught up with caricature. So that’s something I brought. That and a bag of wigs.” – Scott Thompson, Kid in the Hall, on his role in the legendary T.O. comedy troupe

“Gray himself was a musician’s musician. He was a member of The Rheostatics briefly, yet as Dave Bidini stated in book Have Not Been The Same, “had too much talent,” which, coming from Bidini, is truly saying something. Respected by nearly everyone he worked with, Gray was relentless in what mattered most: his work, and his efforts to help foster a community of musicians and a musical identity for the city he called home.” -Joshua Kloke on the Toronto musician, who passed away in August

“The dish that will have le tout Toronto talking is Ursa’s bacon and eggs ($12). Imagine strips of fatty house-cured duck bacon on a super-crisp heirloom potato rosti dressed with compressed wild baby leeks cooked sous-vide in a brown-butter Béarnaise foam topped with two exquisitely poached eggs cooked in an immersion circulator. Momofuku’s David Chang famously slow-cooks his eggs to “about 60 degrees Celsius.” -Steven Davey on Ursa, home of the best bacon and eggs in Hogtown

“The mayor’s office declined to speak on record for this story, and Councillor Ford’s office did not respond to an emailed request seeking clarification of his comments about the incident.”-This paragraph in Ben Spurr’s story about a video of a drink being chucked at the mayor at Taste Of Little Italy pretty much sums up our dealings with him over the past year

“I unfortunately do not have the skill to make you or anyone else invisible, but bear in mind that being silent and non-participatory – by that I mean not chatting with people – in sex clubs is considered rude. You will have to be brave, my dear, and say hello to people and even be semi-clothed. If you don’t already have a nice peignoir, consider purchasing one. I find them to be the most comfortable piece of lingerie to wear in a public setting such as this.” -Our former sex columnist, Sacha, with some advice for a newly-single 53-year-old looking to cross some stuff off her sexual Bucket List

“I want Rob Ford to get help and get better, because it must be miserable being Rob Ford. (I imagine it’s no picnic being Doug, either, but I can’t say I have any sympathy left for that guy.) It’s not too late, except that it is, because Rob lacks the basic means to save himself.”-NOW’s senior film writer, Norman Wilner, gets off the film beat to plead for the mayor’s life

The 50 Best Toronto Albums Ever

“When you look at Young’s career, you recognize Toronto’s musical character in his personal journey. His particular brand of city-boy roots music is still more popular here than almost anywhere else in the world, and that was as true in the era when Blue Rodeo were finding their groove in the early Queen West scene as it is now at venues like the Dakota. His proto-grunge feedback explorations are still reflected in our punk and indie scenes. And even his less universally appreciated experimental moments loom in the background of our long history with weirdo art pop.” -On Neil Young’s Live At Massey Hall 1971, which took the top-spot on our list of the best local albums (also: check out our tie-in video project)