While CF-18s continue to drop 250-kilogram bombs, Canada's military and diplomatic involvement in Iraq since Gulf War 1 has contributed to the staggering loss of more than 2 million Iraqi lives 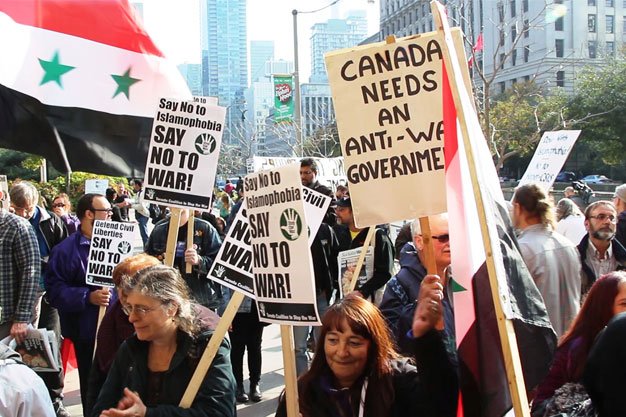 Twenty-five years ago this week, some friends and I poured our blood on the executive office windows of Rexdale’s Litton Systems, which manufactured guidance systems for cruise missiles that were used for the very first time in Gulf War I.

It was real blood, taken the night before by trained medical personnel who shall remain nameless, and put into baby bottles. And it was likely the first time Canadian media showed any bloodshed in their coverage of that one-sided conflict. That was precisely the point of the protest.

Military briefings of the time portrayed a “clean” war that looked as harmless as a high-tech Nintendo game. Generals cracked jokes showing footage of bombs hitting targets that looked no different than animated gaming figures at a Yonge Street arcade.

This past month, while Canadian CF-18s continue to drop 250-kilogram bombs on Iraq (this time against ISIS), Canadian media outlets have looked back at the 25th anniversary of Gulf War I through a feel-good lens.

While Postmedia’s Matthew Fisher called it a “good” conflict, the Toronto Star’s quirky “odd details” retrospective focused on sand hockey and care packages of gloves and scarves sent to the middle of the desert.

They ignore the fact that Iraq has long been a laboratory for modern warfare to push weapons systems on potential buyers. As the Ottawa Citizen reported last month, Canada rents out its soldiers to play the role of catwalk models in corporate sales pitches of Canadian weaponry.

Between 2012 and 2014, such Canadian Forces demonstrations were used to promote armoured brigade vehicles produced by London, Ontario’s General Dynamics Land Systems to regimes in Kuwait and the United Arab Emirates.

Today, the Defence Department’s meticulously compiled, anodyne datebook of terror strikes against ISIS, Operation Impact, proudly touts that the Air Force has flown some 2,018 “sorties” and 396 reconnaissance missions while “delivering some 21,615,000 pounds of fuel to coalition aircraft.” There are no human casualties listed, however. That work is left to groups like airwars.org, who continue trying to piece together bits of information to show the human tally of the bombing campaigns. Their estimates: up to 2,400 civilians killed, and more than 35,000 bombs and missiles dropped.

Canadian attempts to cover up the CF-18 slaughter of some 30 Iraqi civilians in January 2015, only came to light after The Globe and Mail reported on documents released not by Ottawa but by the Pentagon.

They indicate that: “[t]he Canadian military made it clear to the United States shortly after the alleged incident that it felt no obligation under the Geneva Conventions to probe what happened. It should be noted that Canadian Joint Operations Command [legal advisers] opinion is that, under the Law of Armed Conflict (LOAC) there are no obligations for the Canadian Armed Forces to conduct an investigation.”

Canada’s military and diplomatic involvement in Iraq since Gulf War 1 has contributed to the staggering loss of more than 2 million Iraqi lives through direct warfare and economic sanctions so draconian that the UN’s Humanitarian Coordinator, Denis Halliday, condemned them as genocidal.

Iraq’s invasion of Kuwait in August, 1990, was a political godsend, allowing Washington to craft a new enemy – Saddam Hussein as Hitler – and to direct funds from the post-Cold War “peace dividend” into the coffers of the world’s largest weapons manufacturers.

The lead-up to war intensified with a fake PR campaign about Iraqis ripping babies from Kuwaiti incubators (a creation by Hill & Knowlton). It also featured an especially pugnacious Joe Clark leading the charge as Canada’s External Affairs Minister, from which perch he said Canada would fight with or without UN authorization. He labeled as “counterproductive” any pledges that Allied forces would not use nuclear weapons against Iraq, and ordered 800 body bags.

Canada’s cynicism about a diplomatic solution was also clear, as a healthy chunk of change to pay for the war was set aside very early on, cutting $500 million in social programs in the process. The Canadian military also took part in an over-the-top vaccination regime for its soldiers. This chemical cocktail, when combined with overseas exposure to depleted uranium, resulted in Gulf War Syndrome, condemning returning veterans to die slowly, painfully, and largely in silence.

While anti-war demonstrations broke out across the country, CSIS and the RCMP stepped up an intensive, racially-targeted campaign at home that prompted the Canadian Arab Federation to produce a rights handbook, When CSIS Calls.

The Alliance for Nonviolent Action (a coalition in which I was an organizer) called for direct action at military bases and for a shutdown of the External Affairs building in Ottawa. The RCMP threatened us with changes of treason, and when the Toronto Star printed my home phone number in a story on how to reserve seats on buses headed for Ottawa, a round-the-clock barrage of death threats that reflected a visceral hatred whipped up by politicians and press alike followed. The public mood was a toxic mixture of fear, anger, and despair, with headlines about terror threats and chemical weapons producing an end-times feeling.

After sleeping on a church floor, about 300 of us ventured out into a minus-35 degrees Celsius chill. Among our number was 78-year-old World War II veteran Eldon Comfort, who wore his medals. He was roughed up like the rest of us by police that figured we’d tire of being pushed around.

Clark’s motorcade tried entering but was turned away. Some supportive employees refused to cross the line of protestors blocking the front door.

The bombardment of Iraq, where 50 per cent of the population was under the age of 16, continued relentlessly.

But by the time we ventured to Litton in early February, 1991, anti-war protests had dwindled. Only 30 people were there. A dozen of us were arrested. That night, we were held at Metro West Detention Centre, where, triple bunked, we were the only white people on the range. Guards had shown us pictures of our black cellmates in advance, warning us that we would be beaten because they allegedly didn’t like peace protesters.

Rather, at about 2 am, a soft, rhythmic chanting began bouncing off the walls. One of my cellmates explained that there were a lot of Rastafarians on the range, and that they were praying for us because, he said, “You guys did a righteous thing today.”

It was one of the most humbling experiences of my life to be with a group of men who had been caged for weeks, months, and years, praying for a group of relatively privileged people who would be out in a day or two.

Matthew Behrens is a freelance writer and social justice advocate who co-ordinates the Homes not Bombs non-violent direct action network.