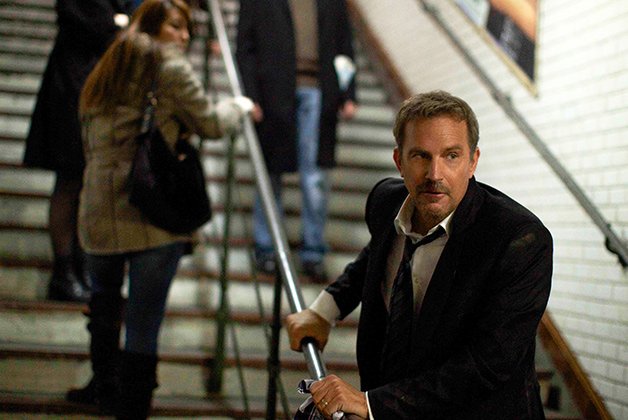 For those of you keeping count, 3 Days To Kill is the second picture in a row by the director who calls himself McG to revolve around an American spy who abuses his position for personal gain. In this one, Kevin Costner’s dying CIA operative tortures an Italian until he gives up his mother’s recipe for spaghetti sauce.

Yeah, 3 Days To Kill is that kind of movie, but not in a good way. Previous productions from writer-producer Luc Besson’s EuropaCorp action factory – Kiss Of The Dragon, the original Taken, various chapters in the Taxi, Transporter and District 13 series – have been plenty stupid, but they’ve owned their stupidity with spectacularly silly action scenes or hopped-up character interactions. They’re not good for you necessarily, but they’re entertaining. But director McG hasn’t really made an -entertaining movie since the first Charlie’s Angels back in 2000.

McG feels like a hired hand on this one, which is clearly out to recapture the lightning-in-a-bottle success of Taken with another middle-aged action hero beating up various ethnic stereotypes in Paris, but the formula just doesn’t work this time around.

Costner is entirely convincing as a dying CIA operative whose attempts to reconcile with his ex (Connie Nielsen) and their daughter (Hailee Steinfeld) are complicated by the agency’s insistence that he hunt down an elusive super-terrorist who’s surfaced in the City of Light. In exchange, his slinky handler (Amber Heard, who used to be above this sort of role) will shoot him up with an experimental drug that might slow down his deterioration.

This ought to be a no-brainer, but the mismatch of sensibilities between Besson and McG – combined with stiff supporting turns by Nielsen and Heard and insultingly haphazard production values (atrocious dialogue looping, incoherent action scenes, a character called The Albino who’s basically just bald) – keeps it from ever taking off.

The only element that works consistently is the father-daughter stuff between Costner and Steinfeld, and even that gets thrown out for the big finale.