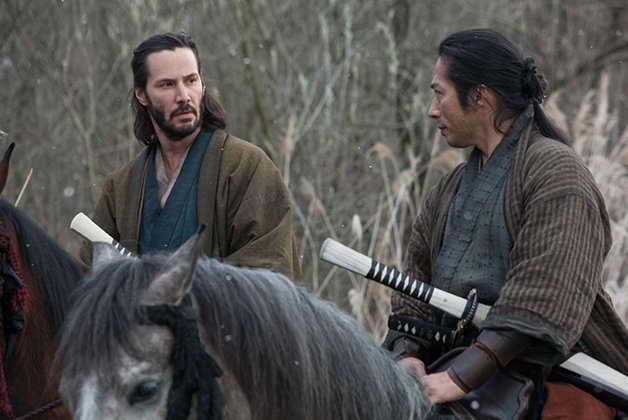 Samurai cinema is a wide-ranging genre. Akira Kurosawa’s dirt-and-grime adventures are a world apart from Takeshi Kitano’s contemplative take on Zatoichi, but they both share the same principles. (Quentin Tarantino’s Kill Bill has samurai DNA in its bones, though of course all sorts of other stuff is sloshing around in there, too.)

A samurai movie can be anything, really: fantastic, realist, archetypal, metaphorical, comic, dramatic. Not boring, though. Guys charging at each other with big swords should never be boring.

This brings us to Carl Rinsch’s 47 Ronin, a luxurious, heavily stylized retelling of the legend of the disgraced samurai who, in 18th century Japan, avenged their master’s murder even though they knew it would mean their own deaths. The story’s been brought to the screen a number of times, most notably by Kenji Mizoguchi in the 40s (as The 47 Ronin) and Hiroshi Inagaki in the 60s (as Chushingura), generally in straightforward dramas that focus on the story’s core values of honour and justice.

Rinsch’s version is neither realist nor considered. It’s a great big stupid epic, set in a fantasy Japan populated by monsters and witches, art-directed within an inch of its life. And still, somehow, it’s staggeringly dull.

The basic points are the same, only now everything is driven by sorcery, as an infernal sorceress (Pacific Rim’s Rinko Kikuchi) and human jerkbag Lord Kira (Tadanobu Asano) conspire to disgrace elderly Lord Asano (Min Tanaka) and thus claim his land. Cast out after their master’s death, Asano’s noble samurai Ôishi (Hiroyuki Sanada) and his men retreat to the wilderness and plot their revenge, even though they’ve been expressly forbidden to retaliate against Kira.

Just as Lord Kira has his witch, Ôishi has a wild card of his own: the half-breed Kai (Keanu Reeves), found by Lord Asano’s men as a teen and raised among them. He’s not a samurai himself, but of course he’s an accomplished warrior in his own right, driven by his pride as much as by his forbidden love for Asano’s daughter Mika (Kô Shibasaki). It takes about half an hour to set all the pieces in place, and then another hour or so for everyone to talk about what they’re about to do before they do it.

A note about the talking: 47 Ronin is performed entirely in English, but most of the cast are not native English speakers. Much of the dialogue is difficult to understand, and a number of lines have clearly been re-recorded for greater clarity. (It doesn’t work.) Reeves is obviously much more comfortable with his dialogue than anyone else in the movie, but the monotone he adopts to signify gravity and a sense of purpose means he’s also bland.

It’s impossible to tell what director Rinsch’s original conception of 47 Ronin might have been. The movie’s been overhauled in post-production, its opening movement chopped up and voiced over by an anonymous British actor, the better to explain what we’re about to see. The vivid pageantry and splendid costumes can’t relieve the boredom even the action sequences, when they happen, have the dreary feel of obligation.

One set piece, in which Reeves battles a CG brute for the amusement of Occidental characters we’ll never see again, feels dropped in from the Pirates Of The Caribbean movies. Given how unlike the rest of the movie it is, I wouldn’t be surprised to learn it was added after principal photography in an attempt to give the trailer something that didn’t look so Japanese.

It doesn’t help. Neither does the 3D, which dulls the colour scheme in the daylight sequences and renders the nighttime action murky and blurry. Best to seek out either the Mizoguchi or Inagaki versions they may not have swirling smoke dragons or magic bird-headed monks, but they work their own magic.