Rae Sremmurd on the year that's taken them from Tupelo, Mississippi to touring all over the world 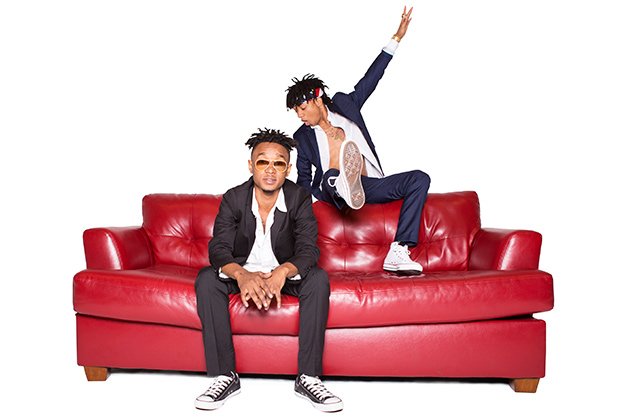 “I want to jump in the crowd with a cape on like Superman,” says one half of the duo, Khalif “Swae Lee” Brown.

His older brother, Aaquil “Slim Jimmy” Brown, interjects. “With an ‘s’ on it for ‘SremmLife!’”

And why not? The American hip-hop duo have already been immortalized in an issue of Marvel’s Captain America last year.

Drawn by artist Stuart Immonen, it depicts the brothers standing on either side of the African-American costumed vigilante, Swae Lee’s dreads held back by a bandana while Slim Jimmy flashes devil horns. A street sign says “NO FLEX ZONE,” the title of their chart-topping, platinum-selling, lightning-in-a-bottle 2014 single. A copy of the issue will set you back $170.

The design captures RS’s colourful personalities and the music they make. Adrenalized onstage antics abound – Slim Jimmy recently cut open his leg on huge piece of glass during a show at Gov Ball in New York City, and not only kept rapping but did so while medics were helping him. (Bets are on whether he’ll play NXNE in a wheelchair or, at the very least, bandages.)

And the lyrics on their debut album, SremmLife, seem as if they were written in all-caps Comic Sans, hitting you over the head with hashtag-ready odes to 24-hour partying.

That subject matter is nothing new – drinking, girls and other spoils of fame – but the brothers’ youthful exuberance (Slim Jimmy is 21, Swae Lee 20) and positivity have led to comparisons to Kriss Kross. Who cares that no one can pronounce their name? (It’s “Ray Shrimmer.”)

Unlike the 90s duo best known for Jump, Rae Sremmurd are no one-hit wonders they’ve had three Billboard-charting singles (No Flex Zone, No Type and Throw Sum Mo) since the album came out in January. Appearances by Big Sean, Nicki Minaj and Young Thug don’t hurt.

Over the phone from Utah during a world tour that’s taken them from Trinidad and Tobago to South Africa, they’re eager to describe how their lives have changed, often talking over each other in excited bursts.

On playing Coachella this year: “DJ Snake brought us out and we got to meet DMX, one of our childhood heroes.”

On the best party they attended: “I drank too much at a nightclub in Vegas and passed out in the club.”

On their new mansion in L.A.: “It’s a dream come true. The skies are always blue and the girls are pretty.”

Like most superheroes, they come from humble beginnings. Raised in Tupelo, Mississippi, they were briefly homeless after their parents divorced when the brothers were young.

Swae Lee worked at a mattress factory, and both made money DJing at house parties and motels. Knowing they had to make a change, they moved to Atlanta on the advice of their friend producer P-Nasty and never looked back.

If you look at the most successful rappers in history, a common shared factor is that they’ve worked with a great producer, a Yoda-like figure who brings out the best in them. Enter Mike Will Made It, the Atlanta producer (Future, Juicy J, Miley Cyrus and Rihanna and others) who signed the boys to his label, EarDrummers (Rae Sremmurd backwards) Entertainment. After the success of No Flex Zone, he wanted the brothers to immediately drop an EP, but they decided to keep working on a full-length.

What has Mike Will’s best advice been thus far?

“Eff. Shit. Up,” says Slim Jimmy, pausing after every word for emphasis.

A tongue-in-cheek response, but an attitude that’s working so far. Don’t let the Instagram videos of the duo doing backflips into their mansion’s pool fool you either – they’re hard at work making new music. They estimate they’ve recorded 100 songs for a not-yet-titled project.

“We play them around girls, and if they like one of our songs then you know it’s a good song,” says Slim Jimmy.

They’re predictably tight-lipped about which big names might make guest appearances. “We’ve got music coming with some of the greatest artists,” boasts Swae Lee. He mentions Rihanna as one of his dream collaborators.

In the meantime, they continue living out their American dream, with a carpe diem attitude in full force.

“The philosophy behind SremmLife is ‘Live your life like an individual,’” says Swae Lee. “Don’t be like the next man. Be yourself. Be who you are and don’t try to assimilate.”

Hey, every superhero needs a motto.