NOW MagazineMusicNXNE 2015 Guide: 5 Shows where you might feel a bit weedy

NXNE 2015 Guide: 5 Shows where you might feel a bit weedy 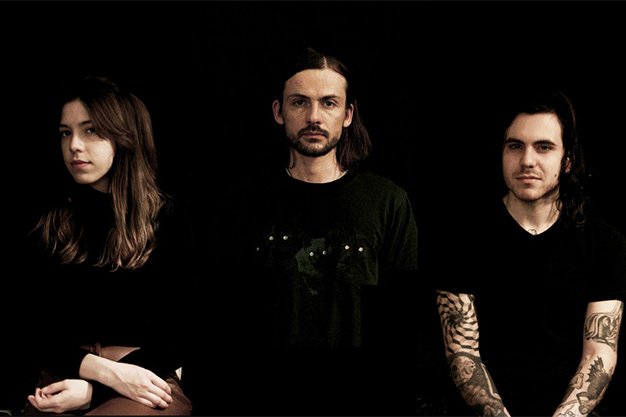 Crosss specialize in bong-worthy sludge doom dowsed in minor-key occult-nodding otherworldliness, their riffs churning and burning, the drums pulverizing, and Andy March’s vocals sinister and melodic way back in the distance.

LO, their newly released second album on Telephone Explosion, was built much like their first, 2013’s Obsidian Spectre, with March doing most of the heavy songwriting lifting by his lonesome, and former drummer Nathan Doucet making contributions, too.

Both albums feature handfuls of singable fare on the A-side and a lengthy noise dirge on the B-side.

“The thing I like best about this record is it at once concludes what we were doing on the first record – it ties it all up – and also opens up a few new avenues,” says March over the phone from his Toronto home. “I hope that when we move on, if we decide to take a different direction, it’ll be okay with everybody.”

The biggest change the band is going through is in their lineup. In the past, members were scattered in Halifax, Montreal, Toronto and Hamilton, which made for complicated travel arrangements. Now, for the first time, Crosss’s four members – most of them recent additions – all live in the same city.

“We finally have a rehearsal space, we’re rehearsing every day and we’re excited to collaborate,” March says. “I haven’t had that really ever with this band. We’ve been spending time just playing freely. Jamming, essentially. I’ve been jam-deprived for the last four years, and it changes the chemistry.

“Jamming is such a respectful activity, where you’re paying a lot of attention to each other’s character and not stepping on each other’s toes and appreciating what everybody has in their mind. I missed it.”

Equally important to March and his cohorts – Chris Bowering, Scarlett Rose and Ami Spears – is performance. Crosss are one of Toronto’s most actively touring groups, maintaining a dizzying schedule that few could handle. What keeps March, who also runs Monotype Audio Disk Cutting and the Craft Singles record label when he’s home, craving time in a van hurtling down the Trans-Canada?

“That’s what I do,” he says. “I love to play and perform every day. When I get home, it’s easy for me to forget how that’s really what my job is. The difference between the first and last performance of a tour is monumental. You get in a rhythm. You’re driving in the car and thinking about how you’re going to do things different. You’re practising all the time. It’s like a weeks-long camp, and you make a lot of progress.

“It helps you to self-identity as a musician, too, which is important.”

Don’t know about you, but I like my buzz about as mellow and winding as possible. January’s six-track EP Cowboy Worship – Damon McMahon’s latest offering as Amen Dunes – is a an aura-inducing slice of patient, slowly building atmospheric folk that sucks you into a beautiful place. It’s his third EP since 2010, complementing his four full-lengths released mostly on lo-fi folk stalwart Sacred Bones.

EP song Lezzy Head (Burial) shifts and shakes with minimal production, building on McMahon’s tempered -guitar playing. Like much of his work, it veers toward haunting at times, and if you’re in comfortable surroundings – say, a remote cottage to yourself or a good vantage point at the Berkeley Church – you can easily get sucked into his world. And if you prefer a little more rocking, now and then he speeds things up – take the trippy, jangly Christopher from 2011’s excellent Through Donkey Jaw.

Wherever he takes you, surrender and go for the ride.

The title of the duo’s 2005 debut, Variations On A Theme, pretty much describes OM’s sound: deceptively basic riffs repeat over and over, bending in on themselves, wavering, quivering, hypnotizing the listener, all underpinned by Cisneros’s spooky flat vocals, which evoke solemn religious chanting. Their songs stretch out to eight, 11, 20 minutes, beholden to this dynamic of repetition and variation – with the occasional flute solo.

Hakius left the band when he effectively retired from music in 2008, replaced by Grails drummer Emil Amos. In time, OM’s lineup expanded to include multi-instrumentalist Robert A.A. Lowe. As they’ve evolved, OM’s experimentation has only deepened, and plenty of fans consider the band’s latest incarnation a metal outfit in name only. Maybe Cisneros is content to channel the heaviness back into the recently reformed Sleep. Or maybe he’s getting closer to realizing OM’s namesake: cyclical, echoing, spellbinding, something to get lost inside of, the realization of that vibration of the universe chanted in Buddhism, Hinduism and other Eastern religions. You know: Ommmmmmmm.

How is Raz Fresco already a prolific hip-hop veteran at 20? The young man from Toronto simply kept his head down and put in the work.

Over the past three years, Fresco has released six mixtapes with his BKR$CLB crew, steadily firming up his spot as one of North America’s hottest producers and rappers. His list of past collaborators includes Tyga, Big Sean, B.o.B, Wale, French Montana, Mac Miller, Pete Rock, Buckshot, Bishop Nehru and Raekwon.

His affinity for gritty 90s beats is fascinating given that he closed out that decade as a five-year-old. But there’s something about the era’s music – with its in-your-face desperation for acceptance/equality and penchant for escapism while keeping things “real” – that suits Fresco’s style. (Especially escapism via weed. See Fresco’s Weed Rap, Chain Smoking and the vid for T-Dot Piffery.) Fresco raps with rawness and hunger, infusing his performances with tense conviction and vividly reflecting a world that’s dark and grimy.

On Best Coast’s latest record, California Nights, lead singer Bethany Cosentino kicks off the hazy title track with a confession: “I stay high all the time just to get by.”

But L.A. born grass enthusiast Cosentino and multi-instrumentalist Bobb Bruno have a lot more tricks than stoner pop up their sleeves, with a perfect storm of dancey make-out music influences like 60s girl-groups, classic surf and West Coast garage rock rounding out their sound. California Nights is a bit thicker, heavier and darker than their earlier stuff, but -Cosentino’s magic touch for memorable melodies still runs rampant through every tune.

If you’re into joints at the beach with your friends or extended games of tonsil hockey soundtracked by excellently curated playlists, Best Coast outdoors on a Saturday night should provide the best of both worlds.