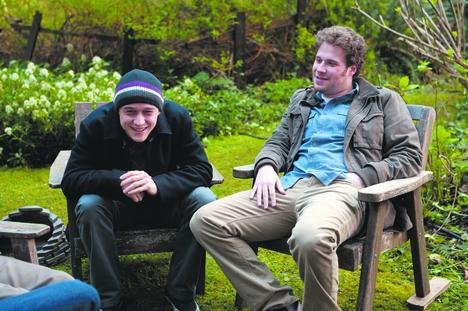 One of the bigger surprises of the just-concluded Toronto Film Festival was the emergence of Seth Rogen as a genuine creative player. His nuanced performance in Sarah Polley’s Take This Waltz and his work as the co-star and producer of Jonathan Levine’s 50/50 combined to banish his misbegotten version of The Green Hornet into the depths of the cinematic memory hole.

50/50 gives Rogen the chance to act more or less like the Seth Rogen character we’ve watched him develop over the past decade or so. He’s jokey, he’s dismissive, he’s awkward. And in this case, he’s playing himself.

The film’s based on screenwriter and real-life Rogen buddy Will Reiser’s own experiences, fictionalized and expanded into an intentionally uncomfortable comedy about illness and mortality. Diagnosed with a rare spinal tumour, Reiser’s doppelgänger, Adam (Joseph Gordon-Levitt), a journalist in his late 20s, copes with chemo and counselling while his best friend, Kyle (Rogen), provides some very inappropriate moral support.

It’s a shaggy and entertaining buddy movie that just happens to have life-or-death stakes. Gordon-Levitt underplays Adam’s pathos, projecting a sort of bewildered perseverance, while Anna Kendrick nicely subverts her Up In The Air certitude as his novice therapist. (Bryce Dallas Howard goes a bit broad as Gordon-Levitt’s shallow girlfriend, though.) Director Levine forgoes the slickness of All The Boys Love Mandy Lane and The Wackness for a grungy immediacy that serves the story well.