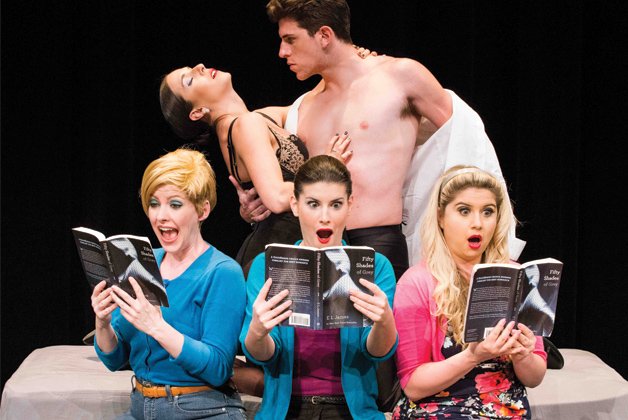 Even if you haven’t read the book, you’ve probably heard of Anastasia Steele, the virginal English lit major who soon finds herself conflicted by (and literally tied up in) a sexual relationship with BDSM-inclined industrial tycoon Christian Grey.

The cast fully commit to their ludicrous roles. As Grey, Jack Boice elicits some of the night’s biggest laughs in a sex scene with well-chosen sound effects, then sings a raunchy song that includes an Urban Dictionary’s worth of slang. Eileen Patterson’s Anastasia is more fun than in the book, and her soaring voice makes even the silliest lyrics palatable. The fine supporting cast includes Kim David in two roles, one of which takes her into the audience in a scene that redefines the phrase “phoning it in.”

Originally conceived for the 2012 Edinburgh Fringe Festival, the show requires little space and would be better staged in a more intimate venue. The material isn’t exactly fresh any more, and the script too frequently relies on cliches and innuendo for easy laughs, but it’s still a night out that’s good for a giggle.