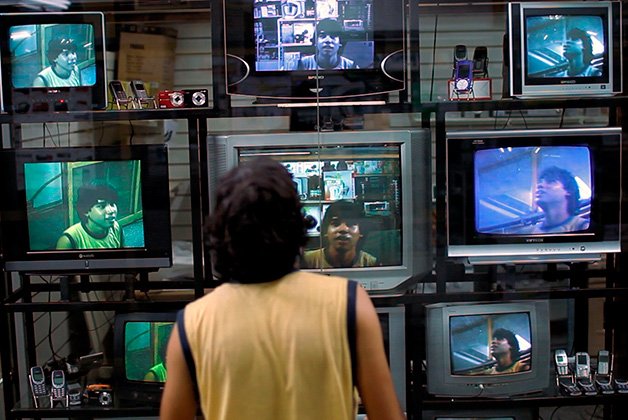 Celso Franco checks out the views in 7 Boxes.

Over-plotted, heavy-handed and excessively eager to impress, 7 Boxes favours momentum, busyness and flash over nuanced characters. But this well-crafted feature debut from Paraguayan co-directors Juan Carlos Maneglia and Tana Schémbori is very inventive with its setting, Asunción’s sprawling Market No. 4, rendered here as a bustling, clamorous labyrinth of stalls and narrow pathways ripe for elaborate chase sequences and claustrophobic games of hide-and-seek.

Seventeen-year-old Victor (Celso Franco) is always fantasizing about his unlikely future as a screen star, parroting lines from Z-grade gangster flicks and striking prolonged poses when he sees himself on CCTV displays in an electronics store window. The possibility of procuring a phone with a video camera – a novelty in 2005, the year the film unfolds – drives Victor to accept a dubious job looking after seven crates of mystery cargo for a sketchy butcher. When their nasty contents are inevitably revealed, the criminal types and corrupt cops on his tail multiply as the film chugs along.

The proliferation of obstacles feels mechanical, but there’s something to be said for Maneglia and Schémbori’s ability to keep their machine running at a breathless clip. Despite its sociological undercurrents, this thriller ultimately feels slight, but it’s not altogether unsatisfying.