EXPLOSIONS FOR THE 21ST CENTURY by Chris Ross-Ewart (Pressgang Theatre/SummerWorks). At The Theatre Centre BMO Incubator. Aug 8 at 5. 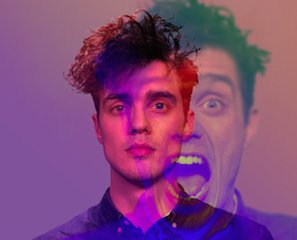 Sound designer Chris Ross-Ewart‘s Explosions For The 21st Century is a fascinating combination of technical lecture, stand-up act and demonstration about how sounds are inextricably linked to our everyday lives.

The tall, gangly, mop-haired performer hails from Vancouver, and early on in his show he illustrates how his sound environment changed from moving from BC (peaceful, sounds of nature) to Toronto (louder, lots of traffic and noise) to the U.S. (louder still, and also with guns).

His material is most engaging when it touches on things like the culturally cliched names for the loops in Apple’s GarageBand or the idea that certain voices aren’t heard in society. There’s potential for an absorbing, politically charged show in the latter idea alone, as he illustrates in a clip from a student protest on a U.S. campus.

But the show, directed by Graham Isador, is content to loosely sample from a variety of ideas and impressions. One of the more powerful sequences comes from a real-life incident in which the artist is asked to create machine gun sounds the day before the shootings in Orlando happen.

While Ross-Ewart’s choices are often spot-on his montage of sounds of the 21st century, one for every year, is a brilliant bit of sound art on its own he’s not the most gripping performer, and at certain moments his voice takes on a shrill, anxiety-producing delivery, a sound effect that surely isn’t intentional.