A climate for change

“The world is now witnessing the fastest-growing anti-corporate campaign ever.” 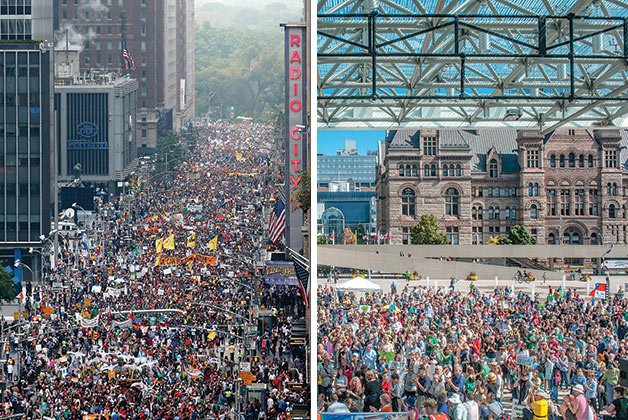 NEW YORK CITY As the light fog that’s descended on New York City begins to lift, the sea of people steadily flooding the streets for the People’s Climate March on Sunday, September 21, seems to have no end.

“The world is now witnessing the fastest-growing anti-corporate campaign ever, and all of the fights trying to put a cork in the fossil fuel bottle,” he says.

He’s blown away by the turnout: “All the people who are blocking pipelines, protesting coal mines, trying to stop a clear-cut – everybody takes new energy from this incredible outpouring.” But McKibben says it’s up to world leaders to put the will of the people into action.

And while the vast majority of nations have been working to address climate change, some countries have fallen far behind. Our own sub-Prime Minister Stephen Harper is among a handful of world leaders who’ve refused to participate in the UN Climate Summit.

“Canada is a rogue nation,” says McKibben. “It’s up to you guys to get rid of him.”

Wandering through the tightly packed streets, I feel like a salmon swimming upstream. It’s better to go with the flow. As I let the crowd carry me along, I see a familiar face standing in front of the Trump Tower. Amidst a swarm of admirers is Indian author/physicist/environmental activist Vandana Shiva.

Shiva has many reasons to walk in the People’s Climate March.

“Climate havoc is already killing people in my country. Every second year now there is a disaster.”

Shiva says the legal framework to fight climate change is already in place under the UN Convention On Climate Change signed more than two decades ago.

“But corporations have subverted it. It all comes down to greed,” she says. “Greedy corporations and politicians taking as much as they can get while the planet and everyone else suffers.”

In the end, she says, the survival of our species will depend on whether or not governments, corporations and all people start actively placing ecology before economy.

Erika Tran, a Greenpeace activist from Toronto, has made the trip south with a group of fellow activists. Tran also sees the unhealthy fixation on economic growth fuelling the global ecological crisis.

“Money is not going to matter any more if you don’t have food to eat and the crops you need to survive. People can’t eat money.”

At the vocal assembly at the People’s Village on 11th Avenue, young activist Ta’Kaiya Blaney takes the stage to share a few words before performing her songs Earth Revolution and Turn The World Around.

As a member of the Sliammon First Nation near Powell River, BC, the 13-year-old activist/artist has witnessed the damage cycles of poverty has inflicted on her people.

The Sliammon First Nation is one of 20 indigenous Coast Salish tribes inhabiting Canada’s Pacific region. The Tla’amin people have a rich heritage that stretches back more than 2,000 years. Their struggle is similar to those of other indigenous nations around the world.

Blaney believes the terms of the struggle need to change.

“Many of us are angry, and many of us are going through stages of grieving and loss over our natural environment, a type of separation anxiety between Mother Earth and her children. We cannot build the future off of anger. We have to build our collective vision for the future on compassion, love and respect.”

The massive audience that’s gathered for her performance falls silent.