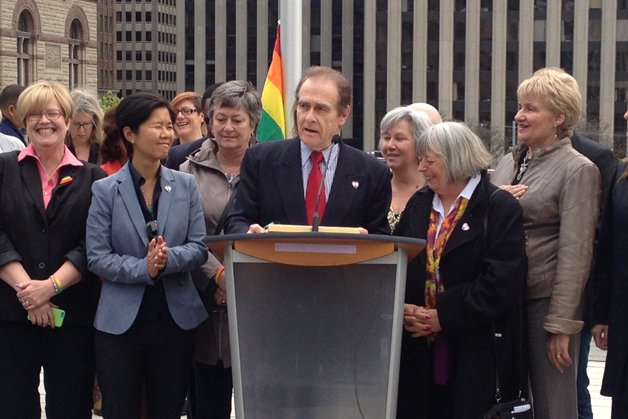 It was a much happier group of councillors that gathered on the roof of City Hall to mark this year’s International Day Against Homophobia and Transphobia on Friday.

Last year, the rainbow-flag raising event was almost a disaster. It took place the day after news broke that Rob Ford had been caught on tape smoking crack cocaine, and was quickly overshadowed by the ensuing shitstorm from which we have yet to recover. This photo taken by NOW’s Jonathan Goldsbie pretty much sums it up: 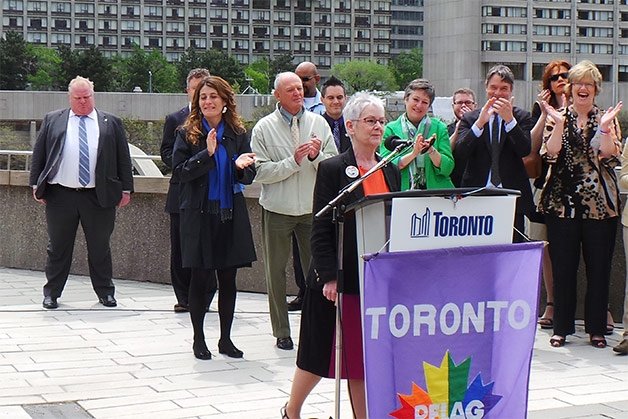 Since then a lot has changed – Ford has been caught on tape in an intoxicated tirade against “the gays,” skipped town ostensibly to go into rehab (he was spotted at a Muskoka shopping plaza Friday afternoon), and left his duties to Deputy Mayor Norm Kelly.

The council members and officials who crowded around Kelly were clearly thrilled that he, and not the mayor, was presiding over the ceremony.

“We’re so happy to be standing with you today,” Councillor Paula Fletcher told Kelly.

But the day really belonged to the president of Parents, Families and Friends of Lesbians and Gays, the group that organized the event. In the past PFLAG’s Irene Miller turned the other cheek to Ford’s reported homophobia and refused to criticize him, but on Friday she came out swinging. She delivered an emotional speech that was equal parts a rebuke of Ford’s bigotry, an affirmation of queer rights, and an impassioned plea to build a more equitable city.

Afterwards Miller, who is stepping down next week, told NOW that Ford’s attempt to remove the rainbow flag from City Hall in February and the sexual remarks he was recorded making about Councillor Karen Stintz convinced her the mayor no longer deserved the benefit of the doubt.

Miller’s speech was so good we thought it worth sharing in full. The full text is below:

I never speak from notes, but today I am going to use my crib sheet because there are one or two things I do not want to miss the opportunity to say. Hang on to your hats.

The flags are flying. Do you feel it? The winds of change at Toronto City Hall. I’m feeling it.

I chose to come to Canada, and I chose to live in Toronto and I am so thankful that this is the city in which our son leads his gay life. We are privileged. We know that in 77 countries around the world it is a crime to be gay.

And for all of you who are LGBTTQQI2S, my heart goes out to you every time you see or hear a report of what people like you are suffering around the world. And as a mother it pierces my heart to think that in places like Russia a mom like me cannot stand in public and talk about how proud she is of her gay son.

And it hurts me to think that by dint of fact that I wear my heart on my sleeve, around my neck, on my lapel, I could be thrown in jail just for doing what a mother is supposed to do – love and support all of your children exactly as they are.

But it’s not just around the world. It’s here in Toronto as well. At PFLAG Toronto we find that every single week we hear stories of someone. Two weeks ago we were speaking with a guidance counsellor and were helping her to find safe, out-of-the-home shelter for a grade 10 student who was told “If you’re gay, leave.”

Grade 10. It should not be happening in this city, in this day and age.

And yet, I’m an optimist. I’m the eternal optimist. I stood here year after year listening to a proclamation being read ensuring that anyone LGBTQ was welcomed, respected in this city. Apparently not everyone understood that message.

Because during Sochi, in February this year while cities around the world and across Canada including at our legislature were flying the rainbow flag, Mayor Ford was repeatedly demanding it be taken down.

Now I want to tell you the same day that I heard him say that here in City Hall, I was invited in to speak with Deputy Mayor Norm Kelly who wanted to find out about Toronto PFLAG, about our families, about our community, who listened and made me feel most welcomed.

I also want to point out that the rainbow flag that was being demanded being taken down in February is here at City Hall today. The flag is here.

Take pride. And I think those of you who are here recognize that the flag is more than a piece of fabric. It really truly means something to all who recognize the struggles that go together in those colours to make it a symbol of hope, support, love, acceptance. It is more than just a piece of cloth and should never, never be disrespected in such a horrible way.

But I am the optimist. And the flag is here. But homophobia, biphobia, transphobia do still exist. And they don’t exist in a vacuum. They need a host, they need someone to actually say them, enact them. And that is where we have a big job to do. We must not permit homophobia. If we permit it, we promote it, and we will not, cannot let that happen. We must, when we hear it, stop it in any way we can. We all have a way to make our needs, our wants, be heard. Make sure you’re speaking to the right people.

I’m so thankful to see city council. We have such support here at City Hall. I am so thankful for that and if you see your councillor here, let them know. Let them know that you support the fact that they are coming out for you.

And it’s not just homophobia, unfortunately. This is a diverse city. We are so lucky in Toronto. It is almost impossible to not broaden your knowledge every single day because you step outside your door, you are tripping over diversity. Other religions, other ethnicities, other cultures, other types of families.

When someone makes a misogynistic or sexist remark it hurts me, it’s like a slap on my face. And every woman should feel insulted, but every man knows that that could have been his mother, his sister, his daughter, his niece. It hurts everyone, whether it’s a racial slur, or I say it calls on your background. The only minorities that we should be dealing with are the bigots and the people who refuse to advance forward.

Toronto has had many nicknames over the years. One of them, I was surprised to learn, was Queen City. I don’t know what that referred to, but I think it sounds good. Another one of course was Muddy York, but there was also Toronto the Good.

Looking to the future, let’s leave the mud part out. And let’s look at the good. In fact, let’s not stop at good. Let’s look at the better. In fact, let’s not stop at better. Look at the best. Let it be Toronto the Best It Can Be. And with all of your support, and all of the support of people here today at all levels of government, from all walks of life, united under that rainbow flag, let us show the world this year that Toronto is the best it can be, and go forward with my love. Thank you.