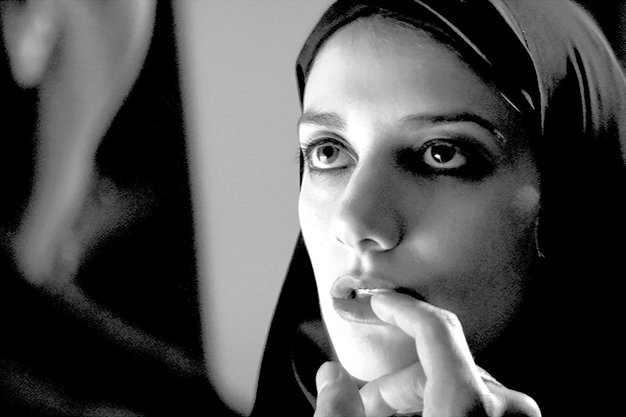 The vampire, both in literature and cinema, is a wonderful metaphor. It can be whatever the writer wants it to be: ravenous id, moral arbiter, sexual, predator – anything. A Girl Walks Home Alone At Night‘s Ana Lily Amirpour knows this, and inserts its blood-drinking immortal into the very intriguing context of present-day Iran.

Sheila Vand is the Girl, watchful, nameless. She cruises the streets of the fictional Bad City on a skateboard, just putting herself out there – inviting men to chat her up, make a move, bring her home. They do what they do she does what she does.

But eventually she meets a guy (Arash Marandi) who doesn’t follow the pattern he isn’t hostile or domineering, doesn’t fall for her quiet, submissive front. And that’s when things get interesting, as writer/director Amirpour lets the characters simply spend time together and watches what happens.

The film is less concerned with its plot than with creating a world and a mood into which the audience can sink. And Amirpour – shooting in black-and-white widescreen in southern California, for a little extra unreality – has built a marvellous world that offers room to wonder about the characters and their lives.

In little touches of style and design – an old Madonna poster on the Girl’s wall, a fashion sense influenced by Jean Seberg in Breathless – we get a sense of how old the Girl might be, or at least what she likes.

Amirpour reveals her own influences in the same way, hinting at Godard, Jarmusch, Lynch and Tarantino. And Kathryn Bigelow, too I bet they’d get along like a house on fire.