A historic night for Canadian basketball

Rapper Drake on hand to cheerlead 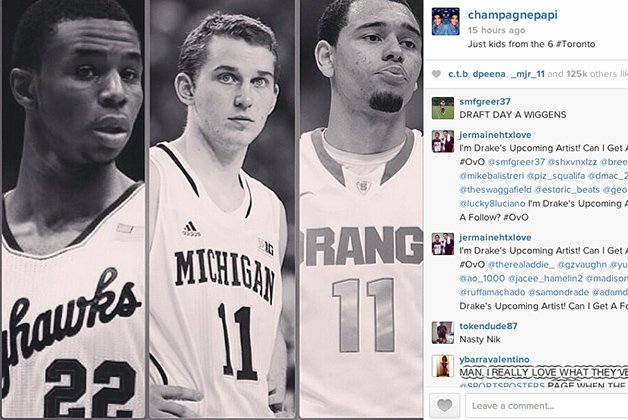 Brooklyn, New York – Dressed in a black-and-white, floral fitted jacket with black pants and black smoking slippers, Canadian basketball phenom Andrew Wiggins had the loudest suit of the night. He said he really wanted to stand out in the sea of well-dressed and nicely-attired rookies at Thursday’s NBA draft. And stand out he did.

Wiggins was chosen first overall, making it the second straight year for a Canadian to be drafted first in the draft.

One year after the Cleveland Cavaliers selected Toronto’s Anthony Bennett with their No. 1 pick, they did it again selecting Vaughan’s Wiggins. The pick kicked off a historic night for Canadian basketball with a record four Canadian-born players selected for the first time.

When NBA commissioner Adam Silver announced Wiggins’ name, the Barclays Center erupted. Wiggins jumped to his feet and was embraced by his parents and older brother Nick, who played at Wichita State.

“A thousand thoughts are going through my head right now,” Wiggins said later. “I’ve been dreaming of this moment since I was a little kid. My dream was just to make it to the NBA. Going to high school and college, the opportunity and possibility of going No. 1 came into the talk, and now I accomplished it, so it’s just a crazy feeling right now. It doesn’t even feel real right now.”

After being the most hyped and scrutinized high school player since LeBron James, widely-acknowledged as the game’s best player, Wiggins now heads to Cleveland, the city that drafted James first overall 11 years later.

The Sacramento Kings grabbed Mississauga’s Nik Stauskas with the eighth overall selection, while the Phoenix Suns drafted Brampton point guard Tyler Ennis out of Syracuse with the 18th pick.

In the second round, the Charlotte Hornets drafted Toronto’s Dwight Powell out of Stanford and the Cavaliers traded for his rights. With Wiggins and Powell going to Cleveland to join forces with Bennett and Tristan Thompson, the Cavaliers will have four Canadian players on its roster.

Stauskas, a sharpshooter out of Michigan was overjoyed for Wiggins.

“It means a lot to us, for sure,” Stauskas said. “I talked with Andrew the last couple of days just being here in New York at the same time. We’re very excited for the future of Canada Basketball.”

Shortly after Wiggins was selected by the Cavaliers, Cleveland Browns football rookie – and Drake bestie – Johnny Manziel tweeted a welcome to Wiggins. Drake posted a photo of Wiggins, Stauskas and Ennis to his Instagram with the caption, “Just kids from the 6 #Toronto.”

Wiggins didn’t lose sight of how big the moment was for everyone watching back home.

“It opens doors for all the youth and everyone in Canada. It gives them hope, you know, because coming up when I was in Canada, I wasn’t ranked or anything. I wasn’t known. I didn’t have any offers or anything like that. But, I kept my head straight and kept working on my game and look where I am today.”