A history of Toronto police board reformers being hounded, smeared and spied upon 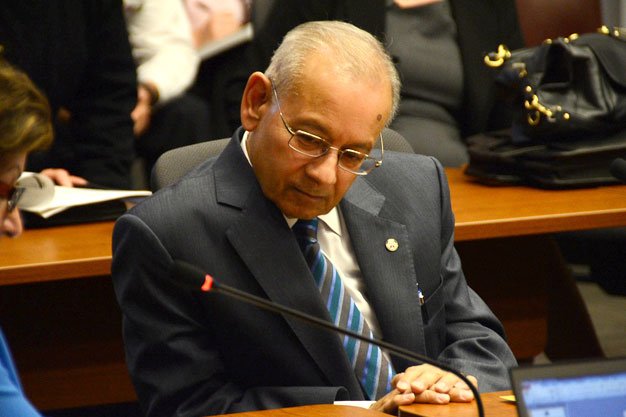 Earlier this week, the Toronto Police Services Board decided to take no action against its chair, Alok Mukherjee, for postings he’d made on Facebook.

Mukherjee – who’d recently stepped up the boldness of his positions on racial profiling and the police budget – shared an image from Occupy Wall Street that pointed out that more Americans are killed annually by police officers than have been killed by Ebola or ISIS. “Just a reminder of who the enemy is in this world,” read Occupy’s statement at the bottom. Mukherjee added the comment “I can’t breathe!” in reference to the police choking death of Eric Garner in New York City.

The Toronto Police Association, the union that demanded Mukherjee’s resignation, has a habit of going after members of the civilian board charged with overseeing the force – particularly those who challenge the status quo. So do other factions within the larger organization.

Board chair Eng, whom Star columnist David Lewis Stein called “the champion of immigrants and minorities,” often disagreed with the force on matters of policy. The union demanded her resignation in the fall of 1992, after she supported the chief’s decision to lay Police Act charges against officers who, as part of a job action, refused to wear their uniforms.

In August 1994, the Star confirmed the long-rumoured existence of a secret file on Eng kept by the police intelligence unit, which it said contained “vague allegations about Eng and Asian mobsters, here and in Hong Kong.”

But it wasn’t for another 13 years that the extent of the force’s probe became known, when the file was leaked to the CBC and showed that Eng’s phone conversations with lawyer, friend and gay rights activist Peter Maloney had been wiretapped. Police even watched the two as they met for dinner on several occasions.

The force had judicial authorization to tap Maloney’s phone as part of a drug investigation but were supposed to disconnect unless a call involved specified persons. According to the CBC, which obtained the full audio in 2010, “police ignored the order and recorded Eng, with some recordings lasting 20 or 30 minutes.”

In her first months as board vice-chair at the dawn of the megacity, Sgro made waves by: objecting to the force’s efforts to acquire a helicopter saying there should be an apology to Jane Doe, who successfully sued police for failing to warn Church-and-Wellesley residents of a serial rapist and taking issue with a police chase that ended with the death of a bystander.

When, in August 1998, the police union announced its intention to begin running negative ads targeting critical politicians, Sgro said it reminded her “of something you’d see in Louisiana, where you daren’t ask the police anything or you’ll be found dead in the back of a car a week later.” The union demanded her resignation. Even after she apologized to the Toronto Police Association – and its New Orleans counterpart – the union requested that the solicitor general investigate the alleged breach of the Police Services Act and that the board refer the matter to the Ontario Civilian Commission on Police Services (OCCPS).

The union abruptly withdrew its complaint against Sgro in November, and by January 1999, word began to leak out about an impending “coup” that would see lobbyist Jeff Lyons replace her as vice-chair. Her demotion was seen as inevitable, until Lyons backed off at the last minute she credited political pressure.

She left the police board upon clinching the Liberal nomination for a federal by-election, but not before the union successfully persuaded the chief to probe any possible involvement she may have had in defacing her opponent’s signs in a previous federal run.

Police critic Chow’s appointment to the board reportedly irked Chief David Boothby so much that it played a role in his decision to retire. And when police union head Craig Bromell suggested that Council should have 23 members instead of the 58 proposed at the time, Chow quipped to the Star, “Now he has to do 58 different secret police files. From 58 files to 23 files, less work for him.”

On June 15, 2000, Chow showed up at an anti-poverty rally at Queen’s Park that had escalated into an extended clash between protesters and police. On live TV, she questioned why police hadn’t done more to calm the situation, which eventually saw 29 people arrested. She also spoke to officers on the scene, including a commander, to ask if there was anything she “could do to help, to mediate. He said no,” she told the Globe.

The union jumped on this, accusing Chow of unlawfully interfering with a police operation and demanding she resign. Despite maintaining that she had said nothing inappropriate, Chow heeded the call and voluntarily resigned from the board, saying the union would turn her continued presence into a distraction from real issues.

As NOW put it at the time, she pre-empted “a two-pronged attack from chief Julian Fantino and union tough guy Craig Bromell by sticking the dagger in herself.”

In January 2004, Heisey was elected to chair the board with a strong reformist mandate, and the lawyer immediately indicated his interest in tackling issues such as the complaints process and racial profiling.

A week later, CTV obtained a copy of an 18-month-old internal memo in which a detective told a superior that Heisey had made remarks sympathetic to child pornographers during a casual conversation at a sex-crimes conference. It further alleged that Heisey inappropriately interfered in a police operation by telling the detective that he hoped a teacher at his son’s school charged with child pornography offences did not go to jail.

The board hired retired judge Sydney Robins to look into the allegations, who not only cleared Heisey, but found the memo leak was “manifestly calculated to damage Mr. Heisey’s reputation and undermine, if not destroy, his ability to continue as chair.” The judge blasted the smear as a “grave injustice” and also expressed dismay that officers were apparently required to keep notes of any concerns arising from interactions with board members.

In January 2004, NOW published an article questioning the wisdom of the board allowing the chief to have a “liaison” officer who shared their office space. (The headline referred to him as “the chief’s mole.”)

The piece included a quote from Councillor McConnell: “In my view, it’s important for the citizen-oversight service board to be both perceived to be and to be independent. You can’t have blurry lines. If you have blurry lines, it compromises the independence of the board.”

The Senior Officers’ Organization (the professional association for high-ranking employees) filed a formal complaint about her to the board, which considered the matter in camera and decided to take no further action.

At around the same time he started asking questions about the size of the chief’s PR team, the Toronto Sun was suddenly printing details of Filion’s life gleaned from years-earlier divorce court proceedings.

Shortly after, Filion said his neighbours observed a vehicle patrolling his house while he was out of town over the Easter weekend. He introduced a motion asking that officers be prohibited from conducting surveillance on board members and elected officials outside of actual criminal investigations, and suggested there was a long-standing pattern of police critics being spied upon. The union demanded he apologize.

Minors, a management consultant who succeeded Roy Williams to become the board’s second black member, spoke bluntly about race relations. In September 1993, he told the Bermuda Times that Toronto police disproportionately shoot and kill black people, then claim they’d been “in fear of their lives.” The union complained that Minors wanted to destroy the force’s morale and urged him to resign.

Talking to the Star the next year about witnesses’ reluctance to speak to police following a shooting at a largely black after-hours club, Minors observed that “There is a long, long, thousand-year history of people not speaking to occupying armies.” The reaction was swift and widespread, with the province’s solicitor general launching an investigation and the police union demanding that Premier Bob Rae remove his appointee. The Ministry of the Attorney General suspended the anti-racism courses Minors taught to crown attorneys but referred the larger probe to the OCCPS, which eventually ruled his remarks did not constitute misconduct.

The first black member of the Police Services Board, Ryerson business professor Williams provoked the ire of the union when he spoke out in support of Dudley Laws. Laws, a prominent activist and key voice railing against police shootings of young black men, had been sued for defamation by the union for having told a May 1990 rally at police HQ that the Metro Toronto force was “the most brutal, murderous police in North America.”

When Williams encouraged donations to Laws’s legal defense fund at a community dinner the following year, the police union was outraged and threatened a work-to-rule campaign if the rest of the board didn’t disassociate itself from Williams. Williams ultimately drafted a two-page letter to the union that the Star termed an “apology of sorts.”

In 1993, he chose not to seek reappointment to the board, describing himself as burnt out. “There are issues like race relations that keep recurring and you are never able to put them to bed,” Williams told the Globe. “You put a lot of energy into an issue, but you have to do it over and over and over again.”