A Little goes a long way 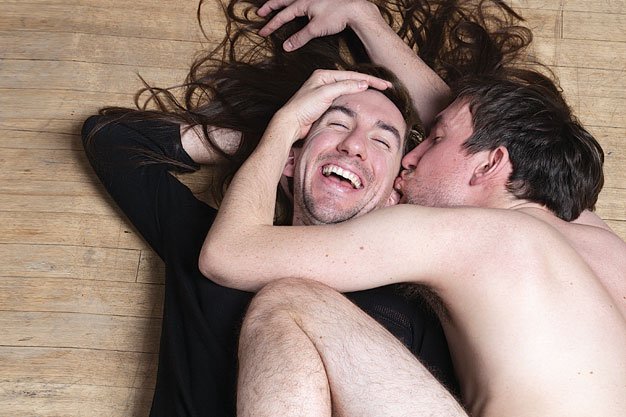 Mark Little cracks himself up in this homage to the famous John and Yoko shot. 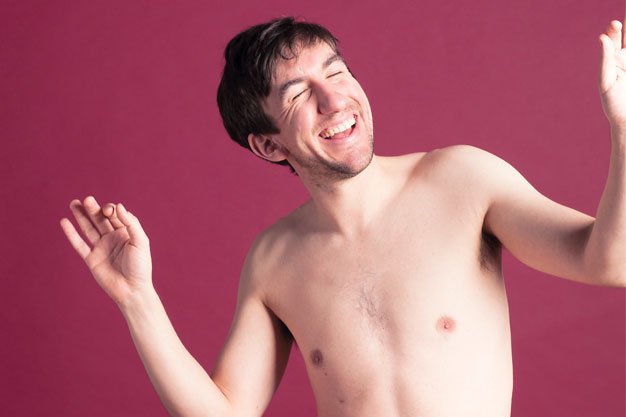 It’s a cold Wednesday night in early November, and a few dozen people are crammed into the intimate Bad Dog Theatre to watch a night of sketch called Get Some.

There’s a ton of talent onstage: the show is essentially a group of sketch performers from other troupes working together, including members of Picnicface, the Sketchersons, Tony Ho and Peter n’ Chris. But it’s hard to take your eyes off the gangly, ectomorphic Mark Little, whose characters include a baseball player throwing a tantrum in the dugout and a sassy guy whose catchphrase is “Cheeky little bitch.”

Within a few minutes, we the audience have become his cheeky little bitches. He can do anything to us and we’ll laugh.

Last year, Little made industry mag Variety’s prestigious 10 Comics To Watch list. His other accolades include winning the homegrown competition of Just For Laughs, where he’s performed half a dozen times. In 2009 he walked away with the $25,000 prize at the Great Canadian Laugh-Off at Yuk Yuk’s. TV viewers know him from three seasons of Mr. D, where he plays the nerdy science teacher, and the short-lived Picnicface series.

So what’s he doing performing for a tiny crowd of hipsters on a weeknight? It can’t be for the money.

“We’re all trying to get better at writing the types of sketches that could get you a job writing or acting on a sketch show,” he explains. A while ago he auditioned for Saturday Night Live and it went well, but he felt he lacked the right material.

“I didn’t have enough solo pieces in my repertoire, and I didn’t have any impressions,” he says. “So a group of us started up this show as a sort of SNL boot camp. We get together, bring a few sketches per week, and everyone helps everyone out. You give notes and advice and jokes for someone else’s sketch, and they do the same on yours.”

We’re talking in a room at the NOW offices, and Little is serious, soft-spoken and sober, more the Dalhousie English grad student he was a decade ago than the comic who can practically change the molecules of the air with his energy. The wit’s still there, but it’s quieter and more subtle.

It was in Halifax, distracted from his M.A., where he got serious about comedy, forming the sketch troupe Picnicface, doing improv with group member Kyle Dooley and being encouraged to do stand-up.

“I remember a stand-up judge at an improv show that Kyle and I were in came up to us and said, ‘You guys know how to do funny things. That’s enough. Please learn how to do stand-up. We need a scene.'”

He honed his craft at the Halifax Yuk Yuk’s, performing for a blue-collar, largely middle-aged crowd. That influenced his early material, which drew on his nerdy appearance.

“I didn’t consider myself a nerd, but I knew that a certain type of person saw me that way,” he says. “I wore glasses therefore I had to be a classic nerd. I told jokes about how a nerd interacts with the world. All of them had a grain of truth, but I exaggerated them. I remember feeling that I couldn’t talk about the things I talked to my friends about. And in a way, I didn’t even know yet how to turn that stuff into comedy.”

Meanwhile, big things were happening with Picnicface. Within a year of forming, Andrew Bush had joined the troupe, and he began taping their sketches. Attention from Will Ferrell on the Funny Or Die website helped their YouTube sketches go viral, including their still gut-busting parody of energy drinks, Powerthirst, which ended up getting more than 26 million views. The Comedy Network series came but was cancelled after one season.

“We were pretty much at the right place at the right time,” Little says about Picnicface. “We posted our sketches to Funny Or Die the same week that Will Ferrell created a column to support sketches because he wanted to raise the site’s profile. His promotion of two of our videos redirected all this attention back to our YouTube site and created all these opportunities.”

Looking back, Little, ever the perfectionist, admits they were all new to sketch.

“When I go back and watch the TV show, there were some good sketches, but there were some – including some of my own – where I think, ‘Holy shit, learn how to write a sketch! How did you have a TV show?'”

And a part of him wishes they’d stayed online.

“Where we had the opportunity to take our sketch the traditional route to TV, others put all their efforts online,” he says. “We left the internet right at the moment when it was becoming a pretty lucrative place for online content.”

A clever if slightly one-note movie called Roller Town, starring Little and many Picnicface members, came out in 2011, earning a cult following.

Little says some young people come up to him to tell him how important the series was to them.

“That’s the best,” he says. “That’s who consumes sketch comedy more than anyone: teenagers. If you’re the one who blows their minds first with what comedy can do, that’s great. You’ve got a place in their heart forever.”

Little puts on a menacing voice and says, “That’s what fosters our power.”

He remembers listening to Jerry Seinfeld’s album I’m Telling You For The Last Time as a teen or preteen in New Westminster, BC and trying out original Seinfeld-like jokes on his mother.

“My first bit was about what it was like when your wife finished the milk and put it back in the fridge,” he says. “I don’t know why I made it about a wife. My world view had been coloured by the Saturday funnies, which were so conservative. I had a Dagwood perspective on the world.”

When he did the joke for his mom, a social worker, she said, “Well, maybe you should write about what you know.” Which, he says, was very good advice.

Now he’s reached a new level in his stand-up. The nerd material is gone, or, in a way, he’s adjusted to the fact that much of his audience is as nerdy as he is. One of his best jokes – about false nostalgia – arose from reading idiotic YouTube comments that compared great entertainers like Johnny Carson and Dean Martin to people like Justin Bieber.

He mixes up his act with imaginative and surreal bits like one in which he turns an awkward fist-bumping attempt with an audience member into a song.

He’s funnier than I’ve ever seen him before, and bounding onto a stage he can rouse a crowd like no one else.

“I still feel like I’m searching for my voice,” he says. “And I’m getting a lot of joy out of that. There’s so much to learn.”

Two years ago, he was hired to work on a sketch comedy pilot for NBC it wasn’t picked up. Currently he’s developing a sketch show with Rogers TV. He and Dan Beirne are making the second season of the web series Space Riders. And, also with Beirne, he’s trying to take his web series Dad Drives to TV.

Speaking of web series, if you search for a show called House Sitters, you can see that Mark’s not so, er, little. In a pilot episode he did with Morgan Waters, there’s a scene where he’s seen showering outdoors.

“There’s a classic 80s-style butt shot,” he says, “and I offered to turn around if they wanted the dick part. That would take it straight out of the 80s and bury it firmly in the early 2000s when all the Apatow dick stuff started hitting the screen.”

The full monty appeared but was covered up because of YouTube rules.

“That was the first time I ever did nudity,” he says. “That was my Halle Berry Monster’s Ball moment. All it took was a single YouTube short with the potential of becoming a web series to get me to air my dick.”

Mark Little on the origin and evolution of his fist-bumping joke and song.

Little on the LA comedy scene.