A Little Maple In Your Easter Egg

Some Canadian viewing options offer themselves up this holiday weekend 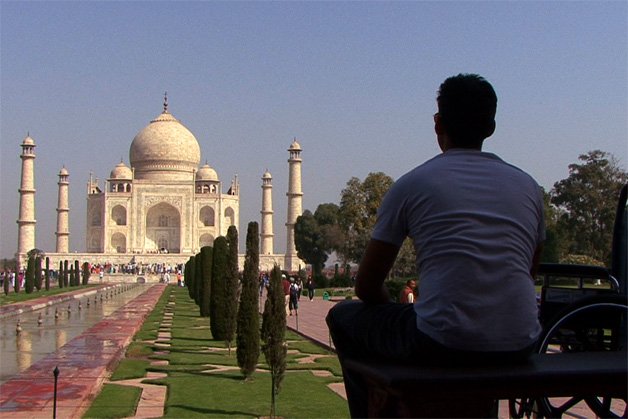 Jason DaSilva at the Taj Mahal in When I Walk.

The sun’s out, the air isn’t made of ice pellets and the long Easter weekend is here. And if you feel like seeing a movie this weekend, here are a few options to help you keep it Canadian.

First up is Hold Fast, opening at the Carlton Cinema today (Friday). It’s an adaptation of Kevin Major’s 1978 book about a troubled 14-year-old who’s uprooted from his small Newfoundland town after his parents are killed in a car crash.

Moved to a larger city to live with his aunt and uncle, Michael (newcomer Avery Ash) has trouble fitting in he can’t figure out the rhythms of his new school, and he really doesn’t get along with his short-tempered uncle (Aiden Flynn). So he runs away to the wilderness with his cousin Curtis (Douglas Sullivan) in tow.

Photographed in some gorgeous Newfoundland and Labrador locations, Hold Fast certainly looks great. But Major’s book is a largely internal narrative, dealing with Michael’s emotional confusion and slow process of self-discovery – which is to say that very little actually happens, and neither screenwriter Rosemary House nor director Justin Simms (Down To The Dirt) have been able to shape the material into something that feels even the least bit cinematic.

There’s also the problem of neither of the young leads being particularly gifted at the whole acting thing Ash is uncertain at best, and Sullivan is just plain bad. If you’re going to bring a beloved children’s classic to the screen, you want to at least cast child actors who are capable of delivering their lines in a convincing manner.

Here’s another option. Tomorrow (Saturday, April 19) at 7 pm, the Bloor Hot Docs Cinema is hosting a special screening of Jason DaSilva’s When I Walk. Winner of the Best Canadian Feature prize at last year’s Hot Docs film festival, it’s a personal documentary about DaSilva’s own life with multiple sclerosis.

Diagnosed in 2006 at age 25, DaSilva found himself becoming an unlikely subject for his own camera, and an unlikely activist for accessibility rights. He’s founded a nonprofit, AXS Lab, designed to educate people about the issue through new media it’s currently developing a web tool and smartphone app to help people in scooters and wheelchairs find accessible businesses and buildings.

This is likely to be the only chance you’ll have to see When I Walk before it goes to VOD and streaming services, and DaSilva will be appearing via Skype for a Q&A after the film. It’s worth your time.

And if you want to wrap up the weekend with a bona fide Canadian classic, TIFF Cinematheque is screening Les Bons Débarras at 5 pm Sunday (April 20). The powerhouse 1979 character study of a 13-year-old girl (Charlotte Laurier) who sets out to punish her overworked mother (Marie Tifo) for her perceived neglect is playing as part of their Michel Brault showcase.

It’s one of the finest films ever produced in Quebec, rivalling Jean-Claude Lauzon’s Léolo in its insight into the raw psychology of its young protagonist, and Brault’s cinematography makes excellent use of the bleak Laurentians locations. Never seen it? There’s your Sunday evening settled.