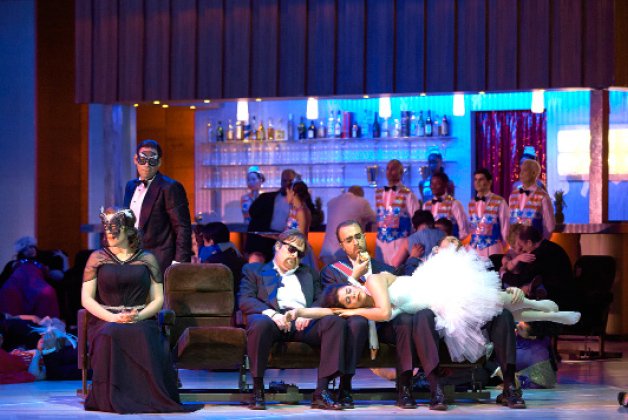 A Masked Ball unveils some major visual and musical treats.

Scattered boos greeted some of the directing/design team of A Masked Ball on opening night, which is a shame. While Jossi Wieler and Sergio Morabito’s production – originally created for Staatsoper Berlin in 2008 – might have some logical inconsistencies, it’s a bold reimagining of Verdi’s timeless opera of love and political intrigue.

The directors have set the story in Kennedy-era America, where the people’s beloved leader, Riccardo (Dimitri Pittas), is surrounded by supporters and some haters. It’s a time of social and political unrest, one act dominated by the disturbing image of a lynched black woman. But it’s also a period of frivolity and fun, as personified by Oscar (Simone Osborne), who’s usually a male page but is here a sort of edgy female artist trying to breathe life into the hallowed halls of Camelot. (At the climactic ball she wears a knockoff of Bjork’s Oscar swan dress.)

The main plot is a love triangle focused on Riccardo’s unrequited love for Amelia (Adrianne Pieczonka), who’s married to his right-hand man, Renato (Roland Wood). In a clever move, the directors have added a fourth figure, Riccardo’s wife and First Lady (Adrienne Kress, decked out like a stylish Jackie) who knows about his affairs. And creeping around the edges are a couple of assassins waiting to take him out.

Wieler and Morabito have an innate feel for the work’s drama, and the characters move on Barbara Ehnes’s candy-coloured set like figures on a living chessboard. Some trivial distractions aside – a game of rock, paper scissors, for instance, or the use of pyjamas in one confusing act – the production is rife with brilliant bits of staging, like having a band play the waltz on a stage-within-a-stage in the final act, or the climactic murder, which happens in a slo-mo, drug-induced haze.

Under Stephen Lord’s vivid, focused conducting of the Canadian Opera Company orchestra, the performers bring out the tragedy (and bits of comedy) in Verdi’s score, especially Pittas, whose Riccardo is believably extroverted and genial, and Pieczonka, whose voice throbs with dignity and passion.

And Elena Manistina delivers some blood-curdling notes as the fortune-teller Ulrica, who presides over this production like a sentinel.