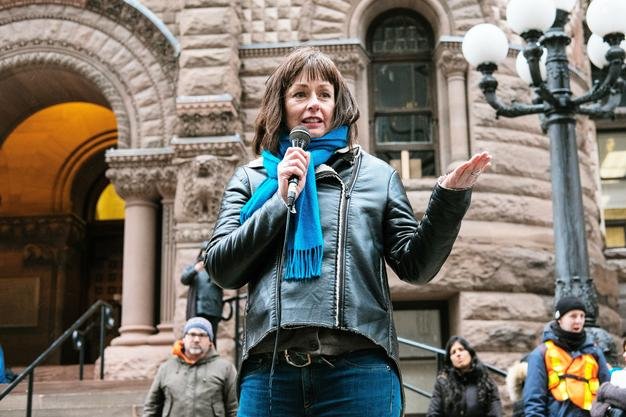 Lucy DeCoutere says Ghomeshi trial was only "phase one of a conversation" about sexual assault.

It was met with shame, shock and awe – but there were no surprises in the Jian Ghomeshi verdict.

Shame that in 2016 a judge would base his ruling on rape myths (where have you been, sir?) shock that everyone was so shocked and awe at the depth of our ignorance of the legal system and its treatment of sexually assaulted women.

On March 24, Ghomeshi was found not guilty on four counts of sexual assault and one of choking.

If that “watershed moment” we were hoping for as a result of this trial is to be had, we need to turn our attention to dismantling our legal system rather than surrendering it to the clique of police, lawyers, Crown attorneys and judges who are seen to be the experts.

We need to intervene and engage in transformative social justice. And I’m not talking about the legal-reform tinkering we usually fall back on – I mean an actual shakedown of the law.

That would include protest and civil disobedience. Personally, I would like to disrupt the courts by rising and politely but firmly objecting when rape mythology is introduced as evidence at trial, and then leaving before they throw me out. No one else is doing it.

But we should begin by reframing our understanding and casting of sexually assaulted women.

After the verdict people asked me how I felt, what did I need, what could they do, what was I doing for self-care. They offered that it must have been traumatizing for me to be in the courtroom, triggering.

I didn’t tell them to fuck off or otherwise react to the offence I felt that my reaction should be limited to emotion and my status to “survivor” because I was raped.

I do not identify or lead as a rape “survivor” or “victim,” nor do the majority of women I know who have been sexually assaulted.

Those are terms and standards that have been imposed on us by our institutions – and some feminisms – in the information dumping that passes for personal and legal empowerment.

They are constructions designed to maintain sexual assault’s power as a tool of social control. I am a political activist, a feminist. I work for social change and justice, and that is the true rallying cry for sexually assaulted women, for all of us, from the Ghomeshi trial.

I don’t want a “safe” space or “sensitive” police, and I don’t really care if you believe me or not. That’s not the point – it’s about believing that our legal system, due to the social mores that inform it, is not qualified to investigate, try or judge crimes of sexual assault. Period.

I don’t underestimate the value and legitimacy of self-healing or the compassion, politics and work of those who provide it.

But I rail against the reduction of sexually assaulted women to passive, broken beings, shells of our former selves who require care and diagnoses originating in our medical institutions.

Where is our anger, outrage, fury? Our joy and passion? How do we now, in all of our locations and movements, strategize and ally with one another, as we see Black Lives Matter activists doing?

Because we can’t separate rape from race, colonialism, poverty, transphobia and homophobia or war, as our courts insist on doing.

The siloing of our movements, the pacification of our rage, the professionalization of social justice, the reliance on policing, legal and social work models to address sexual assault, the fetishizing and infantilizing of women’s sexualities and autonomy all prevent us from mobilizing to create and access channels of social justice and power. Channels of change.

A radical shift is needed that would allow us to make transformative, community-based challenges to sexual assault law through art, technology and – for those who can afford to take the risk – protest.

Revolution requires a mass mobilization to be effective. Leadership and creativity are essential, goals must be defined, anger valued, intersectionalities cherished, art and joy celebrated. And our youth must lead it.

But can we do it? Is there a will? If we throw a sexual assault revolution will anyone come?

If you haven’t been there yet, go to Toronto Police headquarters in support of the Black Lives Matter tent city. Join, support and take direction from that revolution. Recall the success (and failures) of SlutWalk, which went global, the Occupy Movement and Idle No More.

Don’t forget the ongoing political organizing of sex workers who took down oppressive laws and continue the fight to repeal others.

And consider this: given what we have just witnessed in the Ghomeshi trial – and until we do something to stop the current abhorrent legal response to sexually assaulted women – we have no right, we dare not advise them to enter that system. How’s that for revolution?

Jane Doe is a sexual assault author, educator and activist. Read more of her coverage of the Ghomeshi trial here.

Sorry, trolls: comments have been closed on this story.