>>> A Pigeon Sat On A Branch Reflecting On Existence

A PIGEON SAT ON A BRANCH REFLECTING. 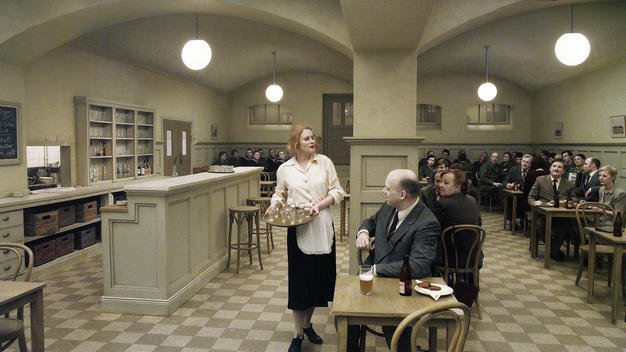 Reflect on Existence with this slow-burn comedy.

A PIGEON SAT ON A BRANCH REFLECTING ON EXISTENCE Rating: NNNN

Roy Andersson’s latest exercise in morbid absurdism opens by declaring itself “the last in an unofficial trilogy about being a human being,” following 2000’s Songs From The Second Floor and 2007’s You, The Living.

While Songs remains the strongest and most perfect articulation of his bleakly comic world view, Pigeon has its moments. The narrative takes place in and around the city of Gothenburg, where two novelty salesmen (Holger Andersson, Nils Westblom) peddle crappy vampire teeth and monster masks while a royal army marches off to war in the background.

If you’re familiar with Andersson’s stately, slow-burn comic style, you may feel that the returns are diminishing – although the filmmaker’s meticulously structured long takes and insanely detailed sets (everything is shot on a soundstage, even the exteriors) still offer something wonderful and bizarre in every scene.

Most of the actors are made up to look like their own ghosts everyone is miserable, though few can articulate the reason. And now I feel I need to remind you that this is almost entirely a comedy.

Almost. Near the end, Andersson changes the tone radically with a deeply disturbing sequence involving an ornate ritual that creates beauty from unadulterated horror. I think he’s telling us he’s ready for something new. I am only slightly nervous to see what that might be. Subtitled. 100 minutes.