What happens when you put six actors in a boat? Chevalier 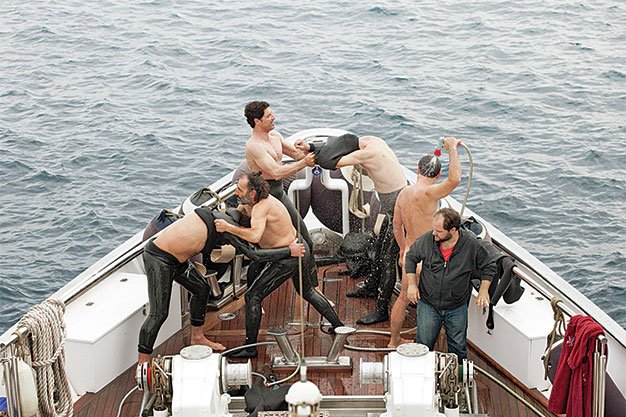 Athina Rachel Tsangari’s new film, Chevalier, is about six Greek men on a yacht who hold a series of contests to determine which of them is “the best.” It’s an absurdist allegorical tale with a tone not dissimilar to her countryman Yorgos Lanthimos’s The Lobster. By stripping the story down to its essential parts, Tsangari finds something primal, raw and fascinating. We talked it over when she brought her film to TIFF last fall.

Tsangari conjured up Chevalier as a series of images. “A bunch of people who are bored out of their minds,” she says. “They start playing a kind of pointless game until someone arbitrarily wins, and somehow the game arbitrarily needs to end, or continue forever.”

The idea of focusing entirely on male characters was a response to her last project, The Capsule, which featured an all-female cast. “I became fascinated by what was happening in the cast and the characters, between the girls, and how they were negotiating their parts with each other.”

Chevalier may be about male competition, but it’s not just for bros.

Although there’s a lot of swagger among the characters, Chevalier pushes back at the idea that physical or emotional vulnerability must be interpreted as a feminine trait. “Seeing my actors struggling with questions like that as male actors, incorporating all that into their characters, was such a gift. It was like a little social -experiment that we did inside that boat for a month, alone.”

The development process was… intense.

In order to figure out the script, Tsangari and her assistant director, also a woman, spent a month workshopping it with the cast. “It was very difficult in the beginning for them to be, like, emotionally naked with each other,” she says. “They had to claim their territory and stake their turf, which is the same thing that a female cast would have done. But I won’t deny that it was a very interesting thing for me to be there, directing traffic in this chemical reaction of testosterone and machismo with vulnerability.”

Don’t look for a larger point to the contests. The contests are the point.

Chevalier is a movie entirely concerned with winning. “I’m extremely interested in power,” Tsangari says. “What happens with power, how do we gain it, how do we negotiate it, how do we steal it. How do we seduce it. What do we do with it when we have it. All of my films deal with that. So does the next one. We have our obsessions, we have the things that we’re trying to comprehend by making films.”