A question of genocide

For many, that word is associated with death camps and Nazi killing units, but what about Canada's tragic treatment of First Nations? 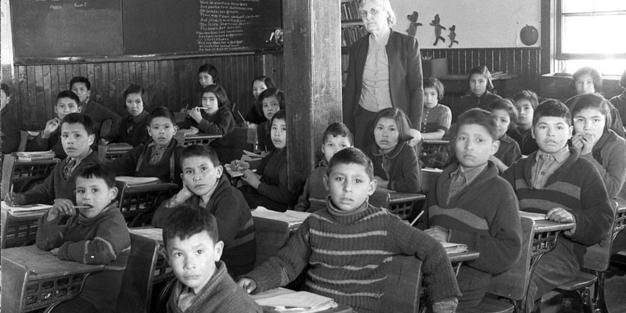 Earlier this month I had an opportunity to visit the Curve Lake reserve north of Peterborough.

There, at the Whetung Ojibwa Gallery, where some of the finest examples of aboriginal art can be viewed and purchased, I met First Nations artist Freddy Taylor.

His powerful works are a testament to the pain and suffering he endured while a “student” at the Mohawk Institute, a residential school near Brantford, the site today of the Woodland Cultural Centre.

Taylor was only six when a federal Indian agent enticed him into his truck with an offer of food and kidnapped him from his parents and community. He didn’t even have a chance to say goodbye. It was 1951.

He told me of his experiences at the residential school. “They gave me the number 39, and that was my identity for the next 10 years,” he says. “I was beaten if I used my name or spoke of my parents or cried.”

Like so many others, Taylor was abused and fed a minimal diet that had him and others sneaking out to the town dump to scrounge for food.

“All I remember is that I was hungry all the time,” he says.

For many, the word “genocide” is associated with images of death camps and Nazi killing units. The question of First Nations genocide is frequently ignored. Is Canada guilty of having committed genocide against First Nations people?

In a debate marking the 200th anniversary of the birth of Canada’s first prime minister, John A. Macdonald, at Queen’s University earlier this year, the question arose. Bob Rae, debating Citizenship and Immigration Minister Chris Alexander, noted that “the destruction of a people and the destruction of a culture fits the United Nations’ definition of genocide. And having said that, we have to deal with the consequences.”

Professor James Daschuk of the University of Regina in his seminal work Clearing The Plains: Disease, Politics Of Starvation And The Loss Of Aboriginal Life accuses John A. of “outright malevolence” for crafting legislation that starved Plains Indians into submission, forcing them to vacate their traditional territories to make way for Macdonald’s railroad. Thousands died of malnutrition because of a policy that Daschuk concludes was “a form of ethnic cleansing and genocide.”

Residential schools established as early as 1870 took as their mission to “kill the Indian in the child.” Upwards of 150,000 First Nations, Metis and Inuit children were literally stolen from their parents and transferred to 130 government-funded, church-run facilities. Thousands of aboriginal children died in residential schools as a result of abuse and neglect.

In 1907, Canada’s first chief medical officer of health, Peter Bryce, issued a report highly critical of Canada’s inadequate efforts to stem the tide of tuberculosis in the schools. Some 24 per cent of residential school students died primarily of TB between 1904 and 1907. The Department of Indian Affairs denied them the improved ventilation, nutrition and care that would have helped stem the epidemic.

And what of the nutrition experiments conducted on residential school children in the 1940s and 50s? According to historian Ian Mosby of the University of Guelph, Canadian researchers used hungry and malnourished aboriginal children to test their theories about vitamin and mineral supplements as substitutes for regular meals.

Much testimony from hundreds of residential school survivors has been gathered over the last few years as part of the Truth and Reconciliation Commission under Justice Murray Sinclair.

One of the commission’s key goals is to “complete a public report that will include recommendations… of the Settlement Agreement concerning the Indian Residential Schools (IRS) system.”

Ceremonies to mark the conclusion of the commission’s work will take place in Ottawa from Sunday to Wednesday (May 31 to June 3).

Justice Sinclair, in an op-ed last year in the Winnipeg Free Press, wrote: “We need to take seriously the perspective that the entire process of colonization in Canada would fall within the definition of genocide as contained in the UN Convention.”

By facing our history, we may eventually begin to heal, and so, too, might Freddy Taylor and many other survivors of this national tragedy.

Bernie Farber is former CEO of the Canadian Jewish Congress. He is part of an effort, along with former national chief Phil Fontaine and philanthropist Michael Dan, to have Canada’s treatment of native people declared a genocide by the United Nations.

The UN’s Convention On The Prevention And Punishment Of The Crime Of Genocide, Article II, defines genocide as “…any of the following acts committed with intent to destroy, in whole or in part, a national, ethnical, racial or religious group, as such:

(a) Killing members of the group

(d) Imposing measures intended to prevent births within the group

(e) Forcibly transferring children of the group to another group.