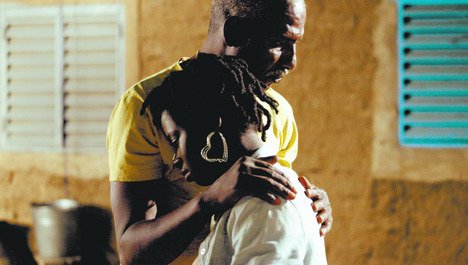 Youssouf Djaoro (right) and Djeneba Kone weigh their options in A Screaming Man.

Youssouf Djaoro (right) and Djénéba Koné weigh their options in A Screaming Man.

Don’t go to A Screaming Man expecting histrionics. Mahamat-Saleh Haroun’s tale of status and self-perception in the African nation of Chad is measured and calm – the better to let us discover its heavy heart.

In the city of N’Djamena, 50-something husband and father Adam (Youssouf Djaoro) works as a pool attendant at a ritzy tourist hotel, enjoying his job and the camaraderie with his co-workers. But the country is in the throes of civil war, and the hotel is struggling there’s a wave of layoffs, and Adam is demoted to working the parking gate. An associate offers him a way to reverse his career spiral, but the remedy carries a terrible price.

The plot – which can be interpreted as an allegory of Chad’s struggle to define itself as a country in the post-colonial age – is largely relegated to the background, as is the bloody power struggle between the rebels and the military. Haroun focuses almost exclusively on Adam as he wanders the increasingly chaotic streets of his city weighing the cost of his choice, forcing us to consider it with him.

It’s a grim, powerful study of a nation in convulsion – and a man whose lost perspective may end up robbing him of his soul as well.