ODDSEOUL (90 Ossington, at Humbert, twitter.com/to_oddseouls) Complete meals for $30 per person, including tax, tip and a PBR. Average tapas. 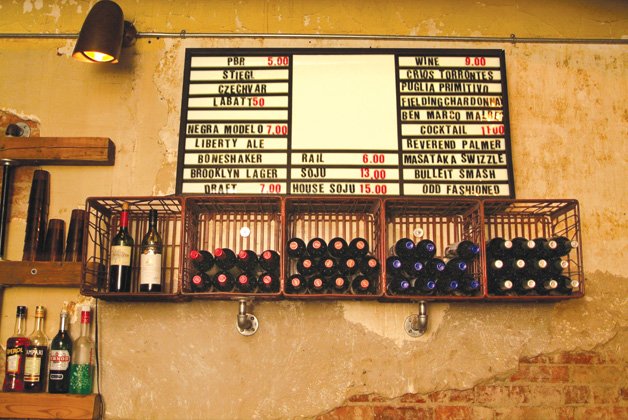 ODDSEOUL (90 Ossington, at Humbert, twitter.com/to_oddseouls) Complete meals for $30 per person, including tax, tip and a PBR. Average tapas $7. Open for dinner Monday to Saturday 6 pm to 2 am. Closed Sunday, some holidays. No reservations. Licensed. Access: one step at door, washrooms in basement. Rating: NNN

Unless you’re proficient in the art of chopsticks, you may find dining at Leemo and Leeto Han’s OddSeoul a bit awkward.

Not only does the three-week-old Korean tapas bar forgo forks, but it doesn’t do knives either. Good luck sharing its East-West take on Philly cheesesteak ($5) with more than two people without one.

You might also want to pack a flashlight, since the 25-watt filament bulbs that hang over the barroom’s tall communal tables shine little illumination on what you’re eating. A menu seemingly written in short-hand – mackerel ($6), anyone? – offers few clues, while the whispered explanations of our otherwise charming server are all but drowned out by the racket of old-school 90s hip-hop. House of Pain, indeed.

Something listed as scallion slaw ($5) turns out to be a rather routine spinach salad dressed in unripe avocado and green onion vinaigrette. Tempura chicken ($14) appears to be properly crisp chicken fingers and a pair of devilled eggs on a bed of napa cabbage tossed with Japanese tartar sauce and a handful of sliced Thai chilies. Tasty enough, but then it was very dark.

A tribute to I Love Lucy? Roseanne’s loose-meat sandwiches? Film director Joseph Losey? Nope, the Loosey ($5) proves to be a very juicy shredded short-rib patty stuffed with kimchee and American processed cheese on sesame-studded challah garnished with pickles, mayo and ketchup. In other words, a cleverly deconstructed Big Mac. And who else would deep-fry great chunks of unskinned squash, then douse them in curried gravy, Kewpie mayo and cheese curds and call it poutine ($7)? More, please!

Now that tacos are hopelessly passe, almost everyone and their sous-chef has moved on to Peking Duck-style lettuce wraps. OddSeoul’s no different, its version buttery leaves of Bibb layered with gorgeously grilled cumin-kissed lamb, raita and spicy ssamjang sauce ($5).

So, why do their shareable Korean ssam platters ($25) all come with raw rice papers? First there’s the rigmarole of dunking said papers into bowls of hot water the size of kitchen sinks, followed by the clumsy wrapping of ingredients – braised pork shoulder, charcoal-smoked and sweetly pickled carrot ‘n’ daikon, all smeared with hoisin and salty Chinese hot sauce. Seems like an awful lot of work for not much reward, as delish a dish as it is. Give us uncut iceberg any day. The platters also include skillets of kimchee fried rice finished with de rigueur runny eggs.

From the name on down to the lack of phone number, OddSeoul clearly isn’t aimed at the crowd that packs the brothers’ Swish by Han for bi bim bap. We get that: it’s about late-night bites between shots of high-octane soju, not a three-course sit-down supper.

But being rushed through nearly three-quarters of the carte in an hour in an empty resto seems, well, a little odd.