A look inside Radiohead's promotional magazine 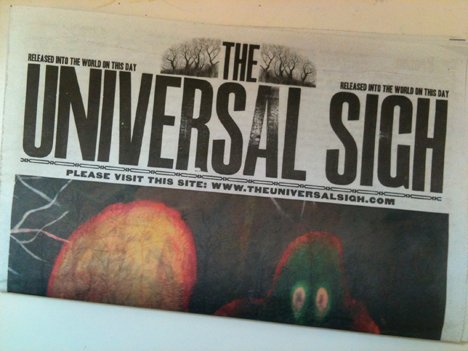 “God’s got the fairy dust out again.” So starts one of the poems on the first page of The Universal Sigh. And judging by the content of Radiohead’s free “newspaper”, He definitely does.

Coinciding with the hard copy release of their new album, The King of Limbs, The Universal Sigh dropped at Yonge-Dundas Square a little after 12 noon Tuesday.

A crowd of almost 50 people had gathered by 12:10 p.m., so 50 minutes before the scheduled release time, delivery staff started handing out papers and snapping shots of excited fans with them. By 1:15 p.m., the lineup – by then moved across the street to the side of H&M by nervous Square security – died down.

Those that didn’t manage to score a copy may (or may not) be pleased to know it has the same black and white, trippy feel of the Lotus Flower video.

The 12-page not-newspaper is the brainchild of collaboration between Radiohead’s five members and artist Stanley Donwood, whose story “Sell your house and buy gold” appears on page eleven.

The Universal Sigh contains poems, stories, and short sentiments (i.e.: You are out of your depth pull yourself together), some interwoven with lyrics of Radiohead songs, along with dark artwork of nature and spirits. The only colour is on the front and back cover, with one splash of red on page six.

The drawings and might-be photos are reminiscent of the dark indie “comics” you could pick up along Queen West in the late ‘90s and early ‘00s. “Haunt” is a blunt, truthful reflection about the struggles of modern-day life weaved into a beautiful, flowing poem. The as-promised story by academic Robert MacFarlane, “Tree Climbing” (about: surprise! Climbing trees) is surprisingly refreshing. Most of The Universal Sigh is crazy, off-kilter cool.

But other stuff seems rambling and creepy. “A beak: bloody flesh still attached. Red against pale green. A siren, far off,” reads a section of one poem Out of it, in it, out of it. Thanks Thom Yorke I just puked.

Obviously, I don’t get some of it. But maybe that’s the point?

“It has really intricate art. It gives you a look inside where their minds were at while working,” said Marc Winer, 25.

One thing is for certain, The Universal Sigh is bound to become a collector’s item.

On Ebay, the paper is going for $20 – $40 on average. One U.K. seller wants $78 plus shipping. Those that can’t afford that might want to head to Sunrise Records, where all this week you can score The King of Limbs on CD or vinyl for $5 with the purchase of a Radiohead tee.