A year of living dangerously for women

More disturbing crimes against women were added to the list in 2014. All emerged out of places that value men more than women: South Africa, Texas, Ottawa 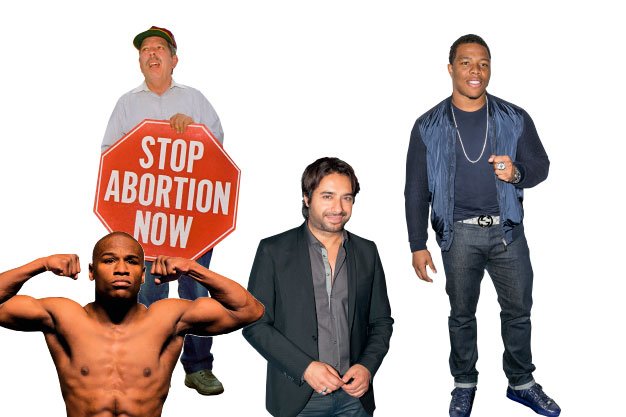 It’s been a terrible year for women.

This first struck me in July. I made a note in my iPhone: “Are women really losing this yr?” and jotted down a few words: Floyd Mayweather, anti-abortion laws in the United States, Nigerian schoolgirls, rape culture.

At that point I could also have added the Isla Vista killings, women’s reproductive rights and the University of Ottawa (both the men’s hockey team rape case and the vicious online attacks on the female president of the Student Federation). But I was at a show and trying to concentrate.

Since then, more disturbing crimes against women were added to the list. Fifteen-year-old Tina Fontaine’s dead body was found in a bag in the Red River. Star NFL running back Ray Rice beat his wife unconscious in an elevator, initially receiving a slap on the wrist until an in-crim-inating video surfaced. South African Paralympic champion sprinter Oscar Pistorius was convicted of culpable homicide and might get only 10 months in prison for killing Reeva Steenkamp, his girlfriend.

There were less obviously egregious but still telling symptoms of an unwell society: the casual sharing of stolen nude photos of female celebrities as if that weren’t a sex crime. And Gamergate.

What do they all have in common? All emerged out of places that value men more than women: South Africa, Texas, Ottawa.

It’s not the individuals and their transgressions that are most disturbing. As unpalatable as these crimes are, it’s easier for me to understand that a murderer or a rapist exists than it is to accept a society that allows murderers and rapists to thrive.

Do I hate boxing freak Floyd “Money-maker” Mayweather for being a serial batterer of women, for being openly misogynistic on his Instagram and for allegedly nearly murdering the mother of his children? Yes.

But I hate the culture that surrounds him more: the World Boxing Council that allowed him to be the highest-paid athlete in the world in 2014 (Mayweather earned $105 million, with a telling zero endorsement deals) the adult male fanboy writers and media who fawn over him the celebrities (Justin Bieber and Nicki Minaj included) who happily pose with him on social media.

In the weeks following the discovery that he’d punched his fiancée’s lights out and calmly dragged her dead weight body out of an elevator, broadcasters such as ESPN’s Stephen A. Smith and athletes like NBA all-star Paul George tried to excuse his ac-tions by saying women should learn how to avoid provoking men, or that she came at him first – never mind that the NFL tried to cover up the whole situation in the first place.

For what? To protect the financial juggernaut that Floyd Mayweather keeps afloat? To prop up the Baltimore Ravens’ chances for a promising season? Because these things are more important than women, says society.

Why is it that when it comes to sports, whether it’s the biggest stars or college-level athletes who probably won’t go anywhere, we forget that everyone is replaceable? There will be another Moneymaker. There will be another NFL season. There is an endless stream of athletes and entertainers ready to replace them. And yet we protect the villains and ignore the victims.

As much progress as we’ve made, we’re still operating in a society where men’s lives – and men’s jobs – are paramount. Mayweather’s career punching other men in the face for sport, for example, is more important than the health and safety of the women in his life who bore and care for his children. Pistorius’s job of sprinting really, really fast is more valuable than being a model. The assumption in both cases is that the women were lucky to have landed these men.

And what happens if you’re nobody? You fall through the cracks. By virtue of being native and a girl, Tina Fontaine meant very little at all. She slipped through police fingers because, despite being a missing person, she was not a priority.

Across an ocean, hundreds of schoolgirls in Nigeria are mere bargaining chips for the larger goals of a terrorist organization.

Now, as we enter the home stretch of 2014, we discover that revered Canadian broadcaster Jian Ghomeshi may be a serial batterer of women and a rapist.

First came the satisfaction that finally this person might be held accountable for his manipulative, malicious actions.

But right after, my own culpability. Like seemingly everyone else, I’d known about Ghomeshi’s reputation for being a scumbag. Like many, I’d heard second- or third-hand that women had left the CBC on account of sexual harassment. In a way, we were all keeping his secret.

And why? Ghomeshi was not well liked personally. According to numerous articles written before and after the fact (Toronto Life, Maclean’s), he was not a fun person professionally either – a petty, unpredictable narcissist. Was Ghomeshi irreplaceable? Certainly not. Like football players or boxers, more radio talents will always be found. So what it comes down to is that CBC execs and countless producers and co-workers deemed dollars most important. For years, they deemed an unlikeable, predatory broadcaster’s life and career more important than the lives and careers of scores of women who had to deal with him.

I can’t and don’t believe that males being victimized or forced to leave their jobs in such a way would have faced the same lackadaisical, uncaring disregard.

The message? Women are expendable in the workplace. This can only be true in a society that undervalues women, our contributions and our humanness. Shame on every CBC employee who turned the other way for their own job security or for their star.

These things are always happening, and maybe they’re just being exposed and written about more than usual in 2014. That is definitely a positive thing. The ensuing discussions and outpouring of humanity can be reassuring.

#YesAllWomen and #BeenRapedNeverReported are good, inspiring social media movements that further important conversations – even though pro-feminist campaigns tend to turn into discussions not about what men should do but about what women can do to keep out of harm’s way. Or debates over whether rape culture is a thing. Or whether getting drunk means you deserve sexual degradation.

These can be exhausting exchanges, but there’s nothing more necessary than having them.

More than any other year, 2014 should be a year when we – Toronto, Canada, the media – undergo a period of painful self-reflection. What environments do we operate in? What kind of messages does silence send? What truths are we ignoring? And what values are we teaching?

It’s time to speak up, no matter who is made to feel uncomfortable. It will be painful and ugly, but we owe it to ourselves and to our women and to our girls.

Violence by the numbers

67% Canadians who know a woman who has experienced physical or sexual abuse.

460,000 Women who reported being sexually assaulted in 2009 national survey.

Less than 10% Percentage of all sexual assaults reported to police.

49% Women murder victims who are killed by their partner.

Every six days a woman is killed by her partner in Canada.

66% Women victims of sexual abuse who are under 24.

40,000 Domestic assault arrests made every year in Canada.

About 1,500 People convicted of sexual assault each year in Canada.

60% Women with disabilities who have experienced some form of violence.

More than 3,300 Women who are forced to seek emergency shelter to escape domestic violence on any given day in Canada.

60% Women in emergency shelters who reported a pet being harmed or killed by an abusive partner.

362,000 Children who witness or experience family violence every year in Canada.

16% Girls under the age of 16 who have experienced some form of incest.

200 Women who are turned away daily because shelters are full.