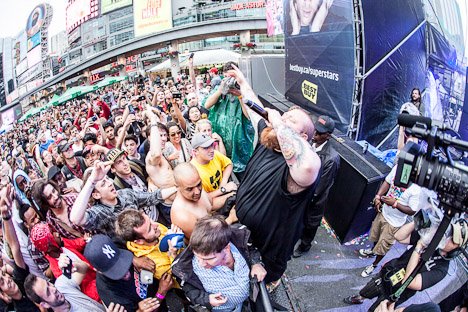 Action Bronson’s headlining show scheduled for the final night of NXNE will no longer take place at Yonge-Dundas Square on June 21 due to public outcry. The festival is still inviting him to perform at another to-be-determined ticketed venue.

A petition started by Erica Shiner to have the Queens rapper removed from the free, public, all-ages show has gained international attention since it launched earlier this week. It was addressed to the city of Toronto, NXNE and NOW Magazine, which has an ownership interest in the festival.

In the petition, Shiner says Bronson “glorifies gang-raping and murdering women,” and calls the lyrics to his song Consensual Rape hate speech. She also links to his video for Brunch, in which he rolls up a dead woman in a carpet, throws her in the back of a van and stabs her.

Over 37,000 people had signed the petition as of press time, including Austra’s Katie Stelmanis, Fucked Up’s Sandy Miranda, Wavelength’s Jonny Dovercourt and many other members of Toronto’s music community.

This afternoon, Friday, May 29, the directors of NXNE released a statement saying that the Action Bronson concert has been cancelled. The statement reads in part:

YDS is the city’s space and as such we are obliged to listen to the city and how the community wants it used. A significant number of Torontonians have indicated their desire to have Action Bronson not perform at the square. As annual guests in this space we feel we must accede to the strong wishes of the community and honour their input.

As a result, we will not be presenting Action Bronson at Yonge-Dundas Square but, hopefully we will still be presenting Action Bronson as part of North By. We remain fundamentally committed to presenting this artist on a Toronto stage and letting audiences decide. We are not moving the Action show because we believe in censoring him or any other artists. In fact, we find the limiting of artistic expression distasteful. When artistic expression is limited, freedom and the evolution of ideas is often the casualty.

Hopefully, Action Bronson will accept our invitation to play at another, ticketed venue in the city so the public can decide for themselves if his work has merit. We booked Bronson, in part, because of his latest excellent disc, Mr. Wonderful.

The statement goes on to say that NXNE hopes to continue the conversation about violence against women and its depiction in art and culture, and that the fest pledges to help act as an agent of change.

The statement comes two days after the festival’s initial response, in which managing director Sara Peel said the fest was engaging in discussion with the community, but that artists’ views are theirs alone and that those offended could check out the other NXNE showcases instead.

Bronson, who has 258,500 Twitter followers, has been tweeting (and sometimes deleting those tweets) about the controversy, saying that the song that has people upset is over five years old and has never been performed live.

“5 years ago a lost track,” he tweeted. “That’s what u base UR argument on? HOW ABOUT THE 9 PROJECTS THAT HAVE COME OUT SINCE? Don’t single me out.”