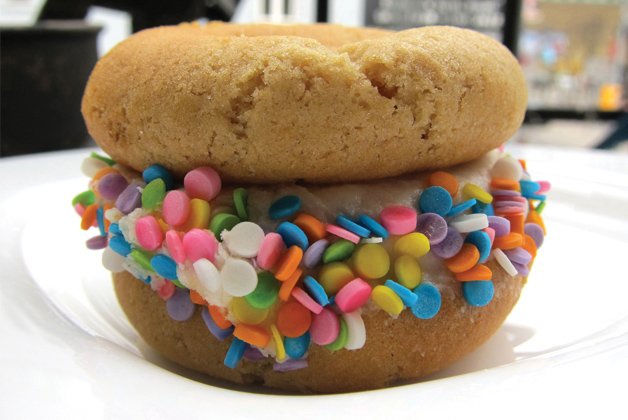 Apiecalypses vanilla dunkaroo looks dangerous even if it is vegan.

Not only is Jen Bundock’s four-month-old bakery entirely vegan, but a portion of the profits help fund a local animal rescue group. She also donates a buck from the sale of every meat- and dairy-free frozen shepherd’s pie – a spicy mix of mushrooms, red peppers and minced TVP topped with old-school mashed potatoes ($14.50) – to the Sea Shepherd’s direct-action conservation organization.

She stuffs panko-crusted jalapeno peppers with faux Daiya cheese and fake-o Baco bits ($2.25) before deep-frying them to crispy perfection. An impossibly rich chocolate Magic Square ($3) gets finished with crushed pecans and toasted coconut a la macaroon. Her vanilla Dunkaroos could pass for Oreos on steroids – with sprinkles! – while her peanut butter cookies (both $4) are dead-ringers for Crispy Crunch chocolate bars. In a blindfold test, the buttery thin crust of her six-inch blackberry-blueberry pies ($11) could pass for the real thing.

“If I can’t make it using vegan ingredients, it doesn’t leave the kitchen,” says Bundock. “I don’t want anything to taste like a compromise.”