The superstar graphic novelist talks about craft, online piracy and what happens when your childhood hobby becomes a career 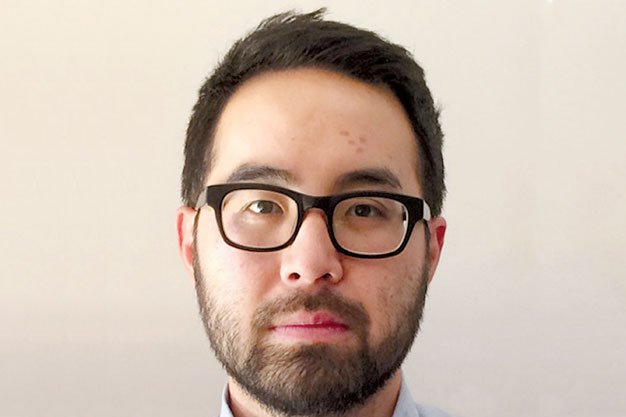 Once upon a time, a successful cartoonist would create characters, perfect his or her drawing style and then churn out works for syndication in newspapers for months, years, decades.

“I probably would have put a bullet in my brain by now if that were my job description,” laughs Adrian Tomine, one of the best graphic novelists of his generation. “Even the idea of sitting down and doing Shortcomings: Part 2,” he says, referring to his successful 2007 book, “I’d be completely despondent.”

Tomine’s managed to mix things up spectacularly – and keep his sanity – by writing beautifully crafted, bittersweet stories about relationships and millennial angst and also drawing clever, pointed illustrations and New Yorker covers. If you don’t recognize his name – pronounced with three syllables, by the way – you’ve seen his work, characterized by clean, clear lines, dramatic situations and an eye for the colours and contradictions of contemporary urban life.

Killing And Dying takes his art to the next level. It’s a collection of six short stories that each has a distinct look and feel, showing his range of subjects and styles. The unforgettable, tragicomic characters include everyone from an abusive, middle-aged pot-dealer who gets involved with a vulnerable fellow addict to a nerdy, stuttering Asian-American teen who tries to do stand-up while her mother is living with cancer.

“When I finished Shortcomings, I felt like I’d hit some limit in terms of that kind of material, the semi-autobiographical, romantic tribulations of young people,” says Tomine from his home in Brooklyn.

“They were drawn in a very precise, almost photo-realistic style. And by the time I finished, I was sick of working in that way. But I didn’t have a real grand plan for this book, or if it was even going to be a graphic novel. I just wanted to have the freedom to approach parts of the book differently from each other.

“That led me to short stories. It’s such a slow, long process that even if I was working on a 10-page story, by the time I was done with it the idea of starting fresh and being free to write and draw however I wanted was very appealing.” 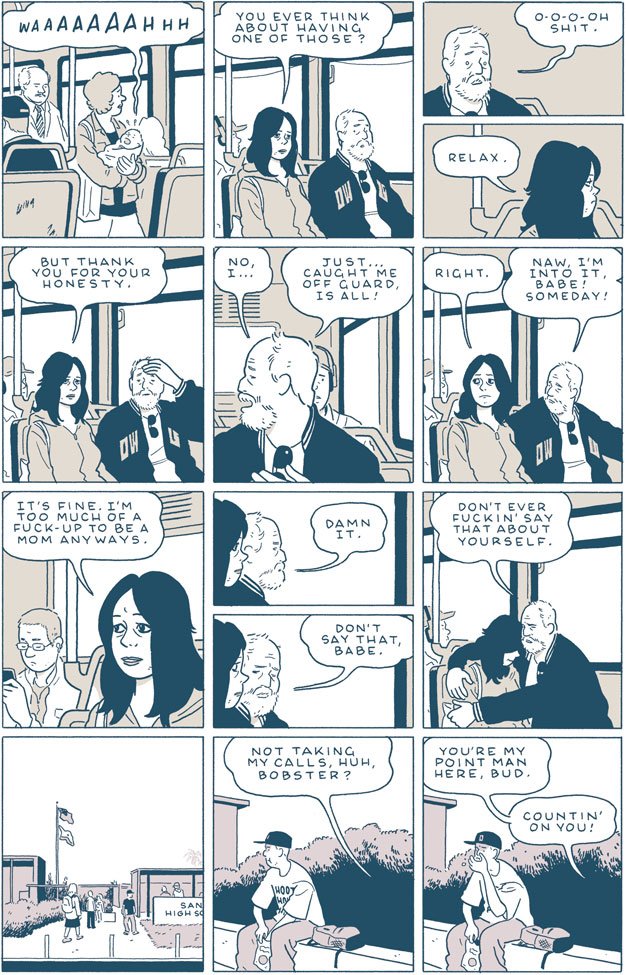 Tomine’s writing is as vivid and nuanced as his visuals – no surprise, since he studied English at Berkeley. What’s left out of these tales haunts you as much as what remains. In Go Owls, the story about the hapless pot dealer, we have to intuit the backstories of the characters without exposition. In the title piece about the teen comic, the word “cancer” isn’t mentioned. Over the course of the story, we just see the mother with hair, with a scarf around her head and then, after a blank panel, she’s gone.

“All the stories in this book are like zoomed-in little segments of a larger story I had in mind.”

Tomine often comes up with a story’s words and images simultaneously.

“It’s like the way you remember an actual experience,” he says. “If you’re thinking of something that happened to you a few days ago, you don’t necessarily think of just the words spoken or [the setting]. It’s that whole sensory experience. That’s how a lot of these stories start out for me. I might have one specific scene in my mind and then expand from there.”

It’s hard not to read something autobiographical into the book’s opener, a funny and absurd tale about a gardener who comes up with the idea of combining sculpture and plants in a hideous way. The protagonist thinks it’s high art, but no one around him agrees.

“I never had any pretensions of being a fine artist like that character,” says Tomine, laughing. “At most I wanted to be an independent cartoonist, which is still inherently a commercial venture. But a lot of his struggles that I play for laughs are things that rattle around in the brains of most creative people. In some ways it’s autobiographical, but in other ways it comes out of me feeling very grateful for the lucky breaks I’ve had as an artist. It can be corrosive to be an aspiring artist for so long.”

One factor that’s made his transition to graphic novelist superstar easier has been his two-decades-long relationship with the Montreal publisher Drawn & Quarterly, who lavish attention on their books even though more mainstream companies are trying to take a chunk out of the market.

“They gave me my first break, and started publishing me at a time when I didn’t even deserve to be published,” says Tomine, who began self-publishing his comics series Optic Nerve as a teen before it was picked up by D&Q.

“They took a gamble and have been completely hands-off since day one. Even when I was an unknown, they gave me full creative freedom. And 20 years later, as the market has changed, the company has grown and yet the print market is more and more difficult, they still give me the exact same freedom.”

Being left alone to write while getting to collaborate on things like the cover, promotion and even advertising is a boon, especially for a self-professed “megalomaniac with a mild case of OCD.”

Speaking of control issues, Tomine is frustrated by increased piracy and says he may soon approve digital versions of his books.

“I’ve seen online versions of my work that look terrible, that have sometimes been taken with iPhones,” he says. “So far I’ve been resistant to doing digital versions. But piracy and poor quality are going to break me down. I think I’ll get to the point where I’ll say, ‘Well, if this is going to be downloadable, at least let me make it look good and put it in a format I approve of.'”

The film world has also come knocking – his intimate stories seem perfect for indie dramas – but so far nothing’s been finalized.

“When [graphic novels] Ghost World and American Splendor came out as movies, there was a little bit more money funnelled into mid-range indie movies,” he says. “But I’ve been told that the kind of stories I write, and the kind of scripts I’m interested in selling, are in some weird zone. They either want a script for a $10 million movie or for a $10,000 film shot on iPhones. There aren’t a lot of investors lining up to do something in the middle.”

But for now, having just turned 40 and with a wife and two young daughters (and no, he will not invade his girls’ privacy by drawing stories about them), he sounds content.

“Since I was a teenager, I’ve felt like I was on an endless cycle of finishing one comic and starting the next. Right now I feel like I’m not in that position any more. I’m trying to take this opportunity to do something different.”

He pauses, considers where he’s at.

“It’s a strange thing when your childhood hobby slowly and incrementally becomes your job,” he says. “I’m trying to find ways to maintain that job but also enjoy it in a way that I did when it was a hobby.”

Tomine on the storytelling feel of his New Yorker covers:

On how graphic novelists are finally being taken seriously in the literary community and elsewhere:

On why he didn’t deal with his Asian-American identity until later in his career: