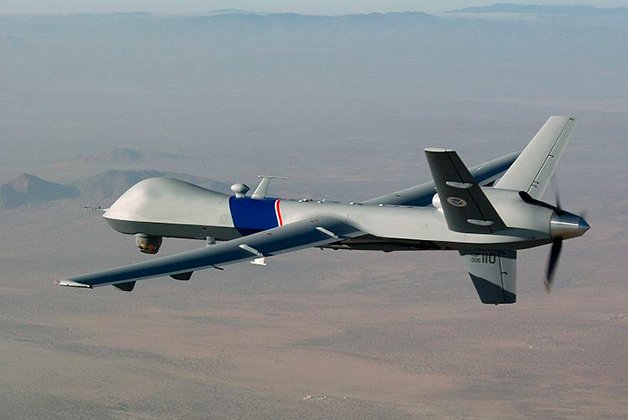 While the publication last week of a U.S. Justice Department memo has triggered the first major debate on drones south of the border, it’s also likely to cast a long shadow over Canadian military affairs.

The document obtained by NBC attempts to establish the rules of the game for the U.S.’s targeted assassinations in Pakistan, Somalia and Yemen, asserting that threats to U.S. interests do not have to be immediate to justify attacks and that U.S. citizens associated with al Qaeda are not immune.

But get ready for all the questions now being raised about the legality of such missions to start migrating north, as the Harper government decides how to acquire armed drones under the Department of National Defence’s Joint Uninhabited Surveillance and Target Acquisition System (JUSTAS).

While the reported $1 billion program is way behind schedule, it’s being closely monitored by the Ottawa-based Rideau Institute, which has just launched a petition and public education campaign aimed at scuttling the idea of armed drones in Canada’s arsenal.

A year ago, then-associate defence minister Julian Fantino dismissed reports that Canada might acquire such vehicles as “mere speculation,” but RCAF spokesperson Holly-Anne Brown confirms to NOW that the force is still on track for the purchases.

The program, she says, is “primarily” about giving Canadian Forces more scope in terms of “intelligence, surveillance and reconnaissance.” (DND has announced the use of smaller unmanned, unarmed craft for Arctic patrols.)

As to larger versions like the Reaper or Predator, capable of carrying weighty “precision-guided munitions,” she says this represents “a secondary” function “in support of deployed operations.

“[JUSTAS] will contribute to equipping the Canadian Forces with the tools they need to be a modern, multi-role force taking on the challenges of the 21st century,” adds Brown, who refuses to be pinned down on a deadline.

The nature of those challenges is, however, not being mapped out. The U.S. and Israel are the only countries employing these weapons at present, according to defence org Global Security. Meanwhile, those working to minimize global conflict fear unmanned vehicles encourage participation in wars because their use means far fewer military casualties and hence less anti-war backlash on the home front.

“We would be making all of the same mistakes the Americans are making,” says the Rideau’s Steven Staples, pointing to the number of civilians inadvertently killed by these supposedly precise weapons. (The Bureau of Investigative Journalism estimates about 500 to 900 civilians have been killed by drones in Pakistan alone since 2004).

At York U, Michael Skinner, a researcher at the Centre for International and Security Studies, points out that the future of aerial war lies with remote-controlled supersonic jet fighters that can get in and out of tricky combat situations. He also suggests that future developments in unmanned aerial tech could make the controversial F-35 stealth jet fighter the Tories have put on hold due to ballooning costs “obsolete.”

“Once the government starts using the [current] armed drones, it will be easier to sell the buying of the next generation of unmanned aerial vehicles, which could be in operation in five years” and will be programmed to fire without the assistance of a human operator at base.

“Politically, governments don’t want to talk about it. You are talking about robotic warfare. That is politically volatile,” he says.

At the Washington-based Center for Defence Information, Winslow Wheeler doubts there will be any move to replace piloted aircraft with drones in the foreseeable future. Even the more capable drones like the MQ-9 Reaper, he says, carry roughly one-ninth to one-fourth of the payload of a manned jet fighter like the F-16.

And the Reaper costs about $120 million U.S., compared to about $55 million for a F-16 jet fighter. “There surely is a future for unmanned systems, but only for those uses where they are effective, survivable and affordable. We are clearly not there yet,” Wheeler tells NOW.

“As an assassination device, drones have the advantage of seemingly holding the perpetrator harmless and politically safe, but it is not clear how long that will last. This story has a long way to go,” he says.

Certainly, the political questions have begun. Queen’s University defence analyst Christian Leuprecht thinks the delay in the JUSTAS program can be partly attributed to the fact that our country is a signatory to the Geneva Convention.

“Canada is likely wrestling with its interpretation of international law,” he says. “We might take part in [U.S.-led] missions, but it is entirely possible that the terms of engagement for Canadians with regard to unmanned aerial vehicles are going to be different.”