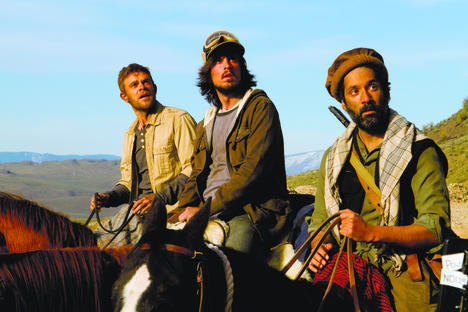 Nick Stahl (left), Nicolas Wright and Stephen Lobo take a break from yelling at each other.

The clusterfuck of Canada’s Afghan mission claims another victim in Trailer Park Boys co-creator Mike Clattenburg, whose attempt to mine the material for black comedy is full of war-is-hell clichés, flat jokes and ragged storytelling.

Two Canadian journalists (Nick Stahl and Nicolas Wright) travel to Afghanistan to investigate rumours of a sniper who claims the fingers of his kills, and find tangled alliances, a well-meaning but inept military effort, a warlord who wants to be a music producer, and comedian Lewis Black playing himself in a three-minute cameo.

None of it matters much, because Clattenburg has no idea how to shoot or cut it into a workable story. But if you enjoy watching actors yell at each other for what seems like an entire day, has he got a movie for you.