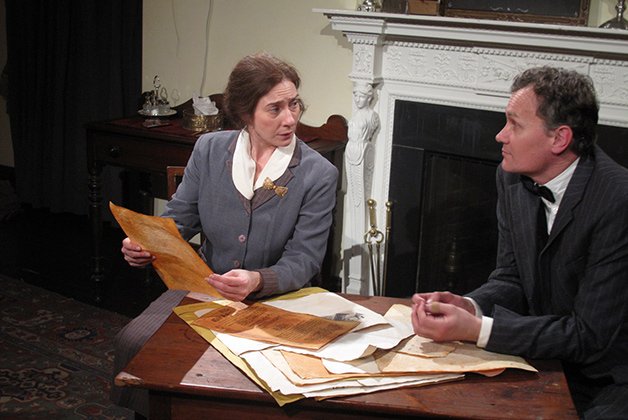 Bittersweet humour, missed emotional connections and a sense of loneliness are all part of Anton Chekhov’s best works.

Playwright Brian Friel understands those qualities and makes them central to Afterplay, a sensitive one-act work inspired by the Russian master. It’s no surprise that Friel gets it right: he’s adapted a number of Chekhov’s scripts, including Uncle Vanya and Three Sisters, both of which he draws on for Afterplay.

Two decades after the curtain falls on those two stories, Vanya’s Sonya and Andrey from Three Sisters meet at a Moscow tavern. When we last saw Sonya, she was devoting herself to working on the family estate and dreaming of rest in the next world. Andrey, brother of the title characters, was saddled with two children and an unfaithful wife and had lost his life’s ambitions.

Now Sonya’s in Moscow trying, without much success, to sort out estate plans with the ministry and the bank. Andrey, a musician, shares a table with her and presents himself as a member of the opera orchestra, scheduled to premiere La Boheme the next evening.

Friel supplies enough details of Chekhov’s plays that we’re filled in on these people’s histories. He goes further, though, by enriching two characters whose hopes were taken away 20 years earlier. He even brings in distant echoes of the plots of The Cherry Orchard and The Seagull.

Director Kyra Harper’s production in Campbell House brings us right into their world, from the Russian tea and cookies we’re served before the show to the intimacy of its cafe setting.

Actors Steve Cumyn and Tracey Ferencz understand Andrey and Sonya, their little social lies as well as the truths they try to hide from themselves. Hyperactive at the start, he develops a nervous blink when uncomfortable and even blushes on cue. This Andrey shyly expresses his interest in Sonya and then pulls back. She’s all business, the occasional sigh alerting us to the fact that all’s not well.

A little vodka helps to loosen them up. Sonya talks of the happiness she’d hoped for with Astrov, the doctor in Uncle Vanya, while Andrey starts to unravel the “fables” he’s told her.

There’s a warmth and gentleness here that initially suggest this pair might find happiness – a kiss near the end intentionally goes on just a second too long. But, as in most Chekhov plays, the ending is a small tragedy, perhaps not heart-breaking but painful for them both.