NOW MagazineMusicMeet your heroes: A fan apologizes to Against Me!’s Laura Jane Grace for calling her a sellout

Meet your heroes: A fan apologizes to Against Me!’s Laura Jane Grace for calling her a sellout

Ahead of his Summerworks show about teen angst and his favourite band, Graham Isador interviews the punk rocker and author of Tranny: Confessions Of Punk Rock's Most Infamous Anarchist Sellout 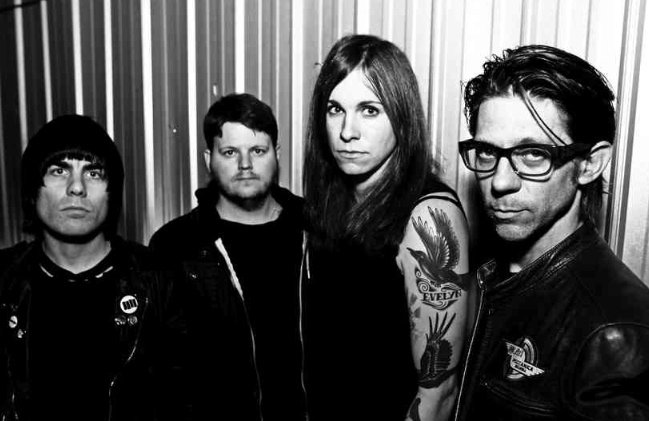 For a period in my life, Against Me! was the most important band in the world. I was a chubby and bookish kid growing up in small town Ontario, and they meant everything: the band’s aggressive music, anarchist politics and undeniable swagger offered refuge – and while I didn’t immediately recognize myself in the band, I saw who I wanted to become. I tried to live by their lyrics and emulate their style, and I discovered leftist literature and three-chord rock. I found bad haircuts and band t-shirts online communities and my first writing gigs.

But when Against Me! signed to Sire Records in 2007, I felt betrayed. Working with a major label was contrary to the DIY ethos the group has instilled in its fans. As quickly as I had championed them, I began to slag them off with the other angry fans on the internet.

In 2012, frontwoman Laura Jane Grace came out as transgender. A lot of former fans came back to the fold, recognizing that supporting Grace was more important. I wanted to feel that way too, but I still had a lot of questions I needed answered. This idea is the basis for my upcoming play Situational Anarchy happening at Summerworks in August. The ending of the play revolves around my recent interview with Grace, where I unloaded my teenage angst onto a person I had never met. We also discussed her upcoming book, the band’s new album, and what it feels like to be “punk rock’s most infamous anarchist sellout.”

Below is an excerpt from that interview:

Graham Isador: Let’s start by talking about the memoir. Did publishers approach you or was this something you wanted to do?

Laura Jane Grace: No, it was completely my own doing. I sought out a literary agent and put together an overview of what it would be about and why I wanted to write it. My book is based on journals. I’ve journaled since I was about eight years old. I literally had boxes and boxes of notebooks. There was this desire to go through, reconcile everything, and then burn it all. It wasn’t that I had started journaling with the intentions of turning it into book, but after that many years I just wondered what the point of it was. I thought that maybe I could do something with it and maybe some kids out there might get something out of my experience or maybe people might read it and have a better idea where I come from.

You seem to have a need to share your experiences. Where does that need come from? Is there anything that feels too personal to talk about?

At this point I wonder if people are getting sick of hearing me talk. I wonder if I should shut up more often. That’s my general feeling because I am like… an open book. Sorry about the pun. But with book stuff coming out: it’s all there. It’s not like I held anything back. I don’t think I know how.

That’s definitely going to be the headline. With new book, Laura Jane Grace is an open book. Let’s unpack that title of the memoir Tranny: Confessions Of Punk Rock’s Most Infamous Anarchist Sellout. Why are you calling it that?

Tranny. I hate that word. I loathe that word. There is a certain amount of reclamation, you know? There is the aspect of owning all the meanest things that anyone has ever said about you. I’ve been called sellout more times in my life than I can count. I want to have some control over all the insults that are thrown at me. The most infamous part is just a reference to the Three Amigos.

Growing up, I was one of those people who called you a sellout, which is something I feel a bit embarrassed about now. But when your band signed to Warner a lot of us teenage anarchists were mad that a band so engrained with politics could be one a major. How would you respond to people like me who slagged off your band then came back?

You were probably pretty young when that happened, right? I don’t know. I mean… I get it. I’m a music fan. I’m not oblivious to certain things. There are bands where I’ve watched their trajectory and thought, “What the fuck are you guys doing?” But as an artist? I knew certain things that other people didn’t know and I have to be true to myself. I don’t necessarily feel like I have to explain that to people, or I didn’t at the time, but a lot of that is actually in the book. Why I made certain decisions and what the reality of things actually were. As far as decisions that the band made? I don’t regret anything. There are certain things with the major label stuff that I learned from and were immensely important learning opportunities. I never would have had those opportunities otherwise.

Did being called those things ever hurt your feelings?

Sure, it grinds you down. I mean we’re not fucking arms dealers. We’re just getting up on stage and playing guitar and drums. We’re not trying to hurt anybody in any way, we were only trying to make music. We were trying to make music and when you have people doing everything from slashing your tires to, physically attacking you, to hurling insults your way…and that’s not even a random occurrence. That was something that happened daily. It’s a cliché to say that other people’s energy influences you but it does. When you’re surrounded by nothing but negativity that grounds you down really quick.

I don’t think I understood your decision until I had to start paying my own rent.

There’s your real headline. That was us, too. The odd realities of playing in a band as you start to grow are crazy. Like, we have to pay taxes? We didn’t know how to file taxes. We had to get a business manager. We didn’t know so many things, which isn’t to say we were infallible. But there are just so many different things that happen that you’re not aware of until your old enough to experience them, and hopefully you get to. That’s life.

Are you aware that people look up to you? What do you think of the term role model?

I don’t try and think in those terms. That’s something I’ll always be grateful for about punk rock. Punk rock was always about breaking down those barriers for me. We’re all equals and people need to be treated that way. The downside of that is that it made me more susceptible to being ground down when you try and put yourself out there and make yourself accessible. I was the one reading the mail that was sent to us because Ian Mackaye [of Minor Threat/Fugazi] taught me that I needed to respond to everybody.

There is one story that I talk about in the book. We were playing this show in Amsterdam. It was like an €8 show, and after we played this anarchist squatter demanded that a security guard go backstage and get me. I didn’t have to go out there, but did, and for a half an hour this anarchist squatter just laid into me about how he didn’t like the venue, or how many amplifiers that we had on stage, or that my band had a bus. I mean if someone came and did that on the street you’d just deck them, but as an artist you’re supposed to take it. I think about that, but I also think about how many great things that people have said. I don’t mean to focus on the negative.

You’ve talked about how you needed to have a lot of control over Transgender Dysphoria Blues and how the upcoming Shape Shift With Me feels like more of a group effort. Can you explain what you mean?

With Transgender Dysphoria Blues it was me wanting to have control in a death choke way. I needed to tell that kind of story. With this new record I wanted to do the opposite. I wanted to open it up to more collaboration. Because the band came right off of touring into the studio, and because most of the songs were actually written on tour, we wanted to maintain that momentum. We were all in this together. It takes a group effort to make this happen and no one is more important than any other part of the machine. That was the mentality. That actually ended up opening me up to collaborations beyond just the band. There are two of the songs where I actually collaborated with Cody Votolato, who was in the Blood Brothers and who played in Cold Cave. I tried to be open to whatever weird opportunities came my way. Instead of building a wall around myself I wanted to be totally open and vulnerable.

I think that’s a good way to try and act. I’m looking forward to the new work and I’m sorry for calling you a sellout.

Don’t be sorry. Just read the book. Let me know what you think.