NowMagazineMusicConcert reviewsAgainst Me! performed a necessary and cathartic act of rebellion at the Phoenix

Against Me! performed a necessary and cathartic act of rebellion at the Phoenix

AGAINST ME! at the Phoenix, Wednesday, June 22. Rating: NNNNNAs a horde of rabid Against Me! fans raised their fists. 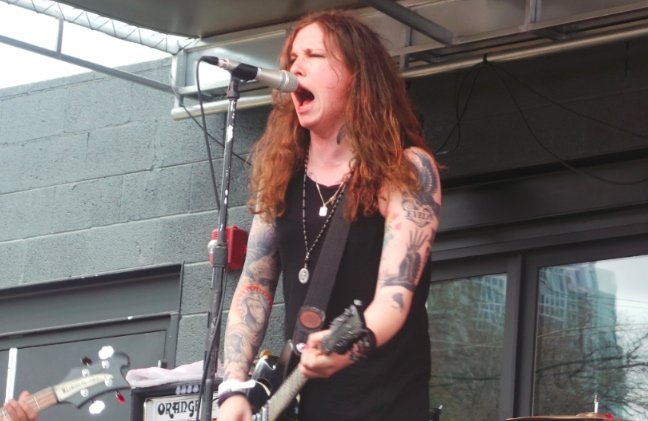 AGAINST ME! at the Phoenix, Wednesday, June 22. Rating: NNNNN

As a horde of rabid Against Me! fans raised their fists and screamed during the opening riffs of I Was A Teenage Anarchist the Florida punk thrashers have few, if any, lukewarm listeners singer Laura Jane Grace, almost instantly smothered in sweat and wearing a miles-wide grin, reminded them that music can still be a tool of rebellion. Do you remember, she belted, when you were young and you wanted to set the world on fire?

A large part of the audience was young enough to still be learning how to start a blaze, and youd be hard pressed to find anyone with more experience who, by the end of the show, wouldnt freely offer lessons on how to make it roar. Later on in the set, a man with a snowy goatee to match his white hair had the kids help him onto a speaker to crowd-surf, giving himself up to an unhinged crowd cheering him on during the fist-pumping Thrash Unreal. Some fires never go out.

Few live music experiences compare to an Against Me! show. The band are just as seasoned as any road-dog stadium-rock pros, and after nearly two decades, they still play with the brawny life-or-death urgency of a snarling basement hardcore group. That may be because rebellion and the fight for fairness never end, and Laura Jane Grace has been a rebel her whole life against cops, social norms, the gender she was assigned at birth.

Onstage, Against Me! are a joyous and necessary rebellion. Only a month ago, Grace burned her male birth certificate at a gig in North Carolina in protest of the states anti-trans bathroom bill HB2, as she waved and exclaimed, Goodbye, gender!

On Wednesday night, after a rollicking cover of the Clashs Train In Vain, Grace brought out Beatrice Martin (aka Coeur de Pirate), who came out as queer last week via an open letter published on Noisey, to stand in for Tegan Quin on Borne On The FM Waves Of The Heart. The visibly elated Martin dodged the barrage of crowd-surfers as she nailed Quins part, capping her appearance off by planting a Hollywood-worthy smooch on Grace, who reeled with the same big grin shed been flashing all night.

The band then steam-rolled through some of their biggest crowd-pleasers FUCKMYLIFE666, the aforementioned Thrash Unreal and Black Me Out before ending with True Trans Soul Rebel, a deceptively triumphant rock n roll storm that addresses the darkness of Graces gender dysphoria. Grace re-emerged by herself, addressing the crowd as she positioned her guitar. It feels good to be here, she said. I hope everyone feels like this is a safe space.

The fact that fans kept rushing the stage to hug and high-five Grace, which she welcomed, indicated that they did, but it also served as a reminder that safe spaces are rare. These rebellions, whether small like a kiss or a concert, or big like a school breaking laws to nurture trans students, are the reasons safe spaces exist. Theyre necessary so that kids can become who theyre meant to be without worrying about being mowed down by a semi-automatic weapon.

These rebellions add up eventually. As Against Me! shredded through their final songs, Democrats at the House of Representatives were staging a sit-in to force a vote on gun control, a protest now into its second day. The reason for these rebellions, after all, is to create a world where being a rebel isnt necessary, a place where pissing in the bathroom where you feel most safe wont get you arrested.

As Grace lay on her back singing Sink, Florida, Sink above an ocean of supporting hands, it was clear that she’s prepared and happy to fight until these rebellions arent necessary any more.

Against Me! The Phoenix