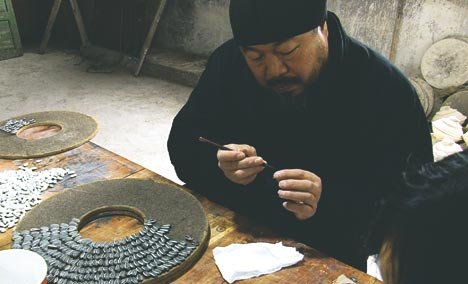 Ai Weiwei helped design Beijing’s Olympic stadium and has been celebrated all over the world. He’s also put himself and his family in danger by taking to Twitter to openly criticize the Chinese government’s draconian policies – leading to his detention for 81 days in the spring of 2011.

Alison Klayman’s documentary follows Ai’s efforts to make art and trouble (sometimes simultaneously) as he prepares for a show at Britain’s Tate Modern and conducts an investigation into the construction of Chinese schools that collapsed in the Sichuan earthquake – which leads to his being assaulted by a police officer and requiring emergency surgery to relieve the resulting swelling in his brain. (He put that on Twitter, too.)

Klayman’s sympathetic lens shows Ai as a man rather than a symbol – and one with a puckish wit that enables him to make light of the darkest situations. But we’re never allowed to forget the risks he’s taking by poking fun at a system that has no sense of humour.