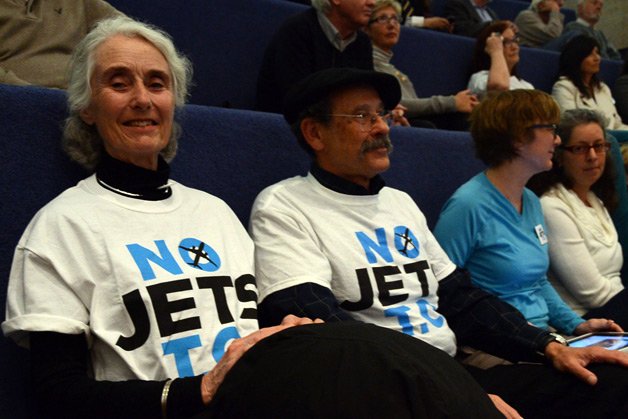 Both sides of island airport debate are claiming victory Tuesday after council voted to continue negotiations on the controversial jet proposal but only under strict conditions aimed at limiting the negative impacts of the waterfront facility.

The council chamber was packed for the hotly anticipated debate on the proposal to allow jets at Billy Bishop Airport and extend its runways by up to 400 metres. Backers of Porter Airlines, the company that first floated the plan last April, were clad in yellow t-shirts and filled one side of the gallery, while allies of NoJetsTO filled the other.

Critics say expanding the airport would have devastating effect on the waterfront, and some councillors had been expected to try to kill off the proposal once and for all. But by Tuesday afternoon that effort had been called off due to lack of support.

Instead, councillors voted unanimously to approve a report that recommended further study of the plan and set out a series of conditions that would have to be met for council to eventually consider allowing jets on Toronto’s waterfront. The decisive vote isn’t expected until next year, under a new term of council.

Councillor Adam Vaughan, a strong opponent of the Porter plan said that the conditions approved by council would compel the Toronto Port Authority, which operates Billy Bishop, to fix existing congestion problems caused by the airport. He denied that council’s vote paved the way to allowing jets.

“We are not giving permission to jets today. What we are doing is negotiating a solution to the current situation, which is completely unworkable,” Vaughan said.

He claimed Porter CEO Bob Deluce had been thwarted in his attempts to expand his operation at the airport. The company currently operates a turboprop fleet out of the airport, and Deluce originally wanted approval of the jet plan by summer 2013.

But Councillor Doug Ford, who along with brother Mayor Rob Ford has been a vocal Porter supporter, said he believed the airport expansion plan could still go ahead. The Fords argue the plan will create jobs.

“As long as they meet the conditions, then we move forward on it. That’s what I think is proper,” he said.

The Fords voted against all but one of the additional conditions or avenues of study proposed by councillors, including Vaughan’s successful motion to direct the Deputy City Manager to report to Council if ownership of the air carriers or airport facilities changes.

He acknowledged, however, that delaying the decisive vote until next year would put a crimp in Porter’s plans. The airline placed a conditional order with Bombardier last spring for up to 30 CS100 jets. Porter was set to start making non-refundable payments on the $2.3-billion fleet this month.

“We will have to evaluate that with Bombardier and determine exactly what we can do,” Cicero said.

Although players on both sides of the issue appeared satisfied, some councillors still expressed concern. Councillor Peter Milczyn, who moved an unsuccessful motion to bury the jet proposal at executive committee last week, said he was worried approving the staff recommendations would eventually lead to expansion of the airport.

“I think if this passes today, then jets will come,” he said Tuesday afternoon before the vote.

In a speech to council, he warned that the city shouldn’t be easily convinced to do anything that could jeopardize an asset like the waterfront.

“Is this a mature city, an adult city that is confident in what it is, where it’s going, and what it wants?” said Milczyn, who is head of the planning committee. “Or are we still young and immature, and every time a shiny bauble gets put in front of us, we’re fascinated by it and run towards it?”

As a result of council’s vote, city staff are now authorized to enter into negotiations with the other two signatories of the airport’s governing agreement-the Toronto Port Authority and Transport Canada-on the set of conditions that must precede any jet approval.

They include taking immediate steps to alleviate the noise, pollution, and traffic generated by the airport, completing an airport master plan and environmental assessment of the expansion, certifying the noise levels of the CS100 planes, and confirming that the longer runways would not increase the marine exclusion zones that exclude boats from the area around Billy Bishop.

A commitment of funding for roughly $300-million worth of ground-side infrastructure improvements would also have to be secured from the port authority. Council stipulated that any costs should not be borne by the city or come from the federal Build Canada fund, which councillors argued would be better spent on other infrastructure priorities.

Before any decision is made on jets, city staff will also seek to manage current turboprop operations by limiting annual passenger loads to a maximum 2.7 million per year, and capping flights at 202 per day.

With a file from Jonathan Goldsbie.