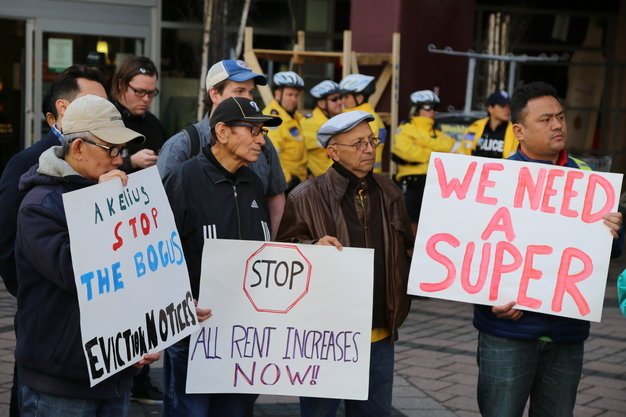 Parkdale tenants journeyed to the Landlord and Tenant Board offices at 70 St. Clair East to rally and face off against their corporate landlord, the Swedish property giant Akelius, on Tuesday (April 28).

In one hearing room tenants of 188 Jameson challenged above-guideline rent increases of 4.1 per cent in 2014 and 4.6 per cent  in 2015 being sought by the landlord.  After electing to enter into mediation with Akelius, they accepted a compromise of a 4.5 per cent over three years.

In another hearing room, tenants of four Parkdale buildings sought the re-instatement of their superintendents who were removed when Akelius buildings shortly after they were purchased by the company.

On that issue, Akelius argued each tenant should be made to make their own application, and that the board should not hear the superintendent issue as a group issue since each tenant’s issues are different. The board did not agree and the superintendent issue was adjourned and set resume between June and August subject to the parties’ availability.

Since Akelius removed superintendents and replaced them with a complaint line, tenants say they have experienced a reduction in the level of service and maintenance in the buildings. They say that they have also expressed concerns to the company about security.

“Akelius wants working class and immigrant tenants out of their buildings in Parkdale, that is clear,” says Cole Webber of Parkdale Community Legal Services. Webber says longstanding tenants are being pushed out to make room for Akelius upgrades. Meanwhile, other units in buildings are being neglected.

Akelius has been buying up rental properties in Toronto, some 2,100 units at 31 locations across the city so far, renovating them and offering them up for rent at higher rates in a practice that housing advocates have described as gentrification through the backdoor.  While media attention has focused on evictions in Parkdale, neighbourhoods from Weston to Regent Park are on Akelius’s radar. 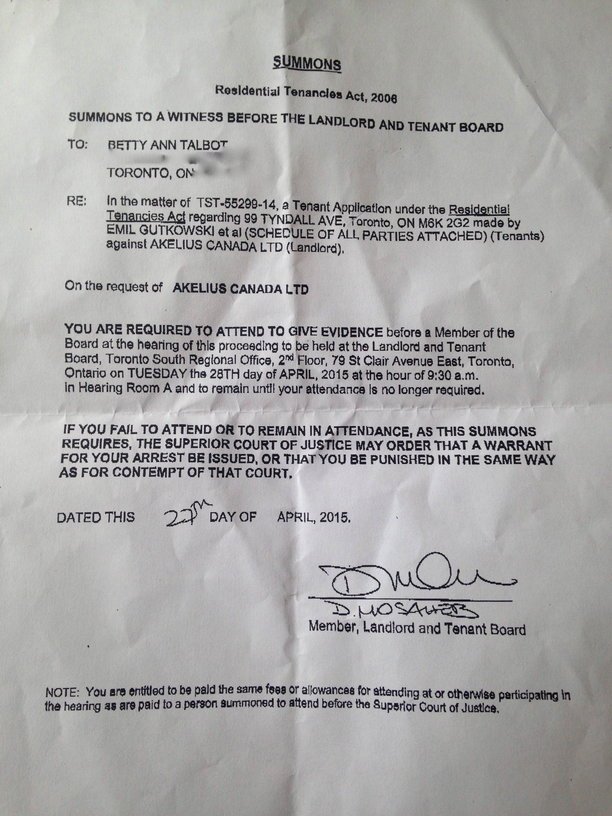 Above-guideline rent increases allow landlords to pass expenses for building improvements to the tenants. But Akelius tenant Annie Gibson, says she had to endure low water pressure and frozen pipes during the winter during renovations to her building. “They’ve ripped out the back of the building, taking away a lot of the insulation to our water pipes.”

Akelius is non-responsive to tenant complaints in her building, which no longer has a superintendent,  says Paulette Mayers. She says there have been intermittent problems with communal laundry at her building, which was without heat for four days this past winter. “I hear that most of the renovated apartments are now equipped with everything – washer dryer, their own heaters, its fully equipped liked a condo. So whatever effects us who have been living here for a long time, I don’t think it affects the new people who move in.”

Approximately a dozen police officers were present for the rally. 53 Division staff sergeant Matthew Moyer says police were notified by the tribunal about the hearing.