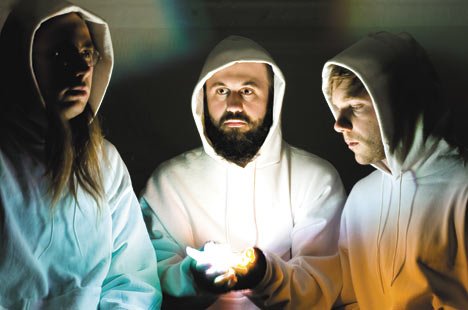 The newest release from Portland pop eccentrics Akron/Family sits somewhere between their last two albums, marrying the most successful elements of both. The intensely joyful mood recalls the unrestrained bliss of 2007’s Love Is Simple, but they’ve kept the searing fuzz guitars and experimental blasts of noise from 2009’s Set ‘Em Wild, Set ‘Em Free, and without dropping the freak folk cult singalong vibe we love them for.

Treat the obnoxiously long title and earnestly weird press release as healthy self-deprecating humour (either that or they’re deeply strange people). While they’re not averse to poking fun at their own hippy tendencies, these LSD-drenched campfire singalongs are no joke. They’re the kinds of songs that make you want to run into the street and scream to the universe that life is beautiful and magical, which is a pretty nice feeling as long as you can stop worrying about whether people think you’re crazy.