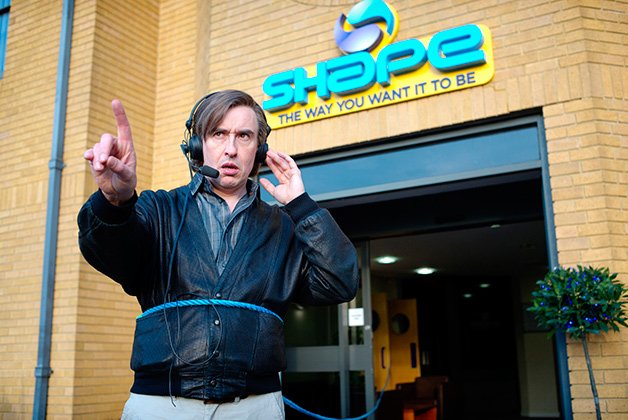 In the years and TV projects that followed, Coogan and collaborators Armando Iannucci and Patrick Marber tracked Partridge’s (fictional) rise to prominence as a TV chat-show host and subsequent banishment to Radio Norwich, where he brays his inanities as a radio DJ. And that’s where Alan Partridge the movie finds Alan Partridge the failure coasting on his brief time in the spotlight.

Partridge is a brilliant comic creation: snide yet unctuous, pretentious yet witless, insistently ceremonious but utterly inept. He’s a sexist, racist, arrogant coward who’ll screw over a fellow broadcaster who considers him a dear friend – which is how he accidentally triggers the hostage situation that forms the core of the movie.

Coogan, Iannucci and their co-writers have rightly concluded that spending 90 minutes with Partridge on a good day would be an extremely unpleasant affair, so they’ve put him in a siege picture. It’s a very clever notion, because Partridge is the very last person with whom you’d want to be trapped in a room.

He’s not trapped there all the time, mind you. Partridge is the one person disgruntled gunman Pat Farrell (Colm Meaney) perceives as being on his side, so Pat picks him as his lifeline to the police when he storms the radio station and takes the staff hostage. This gives Partridge far too much responsibility, which is a terrible idea, and his attempt to fashion himself as the hero of the ensuing standoff is the comic engine that powers the movie.

It doesn’t work as well as it should, though. Declan Lowney’s direction is too pedestrian for the material, embracing neither the action clichés nor the absurdity of seeing Partridge Die Harding his way through his workplace.

Coogan holds it together, utterly debasing himself and getting laughs out of the smallest gulp or shift in posture. It’s a great performance in service of a horrible character, deserving of a better film.