Meanwhile, prairie delegates urge party members not to adopt the Leap Manifesto calling the document pushing a fossil-free future a "betrayal" of Albertans 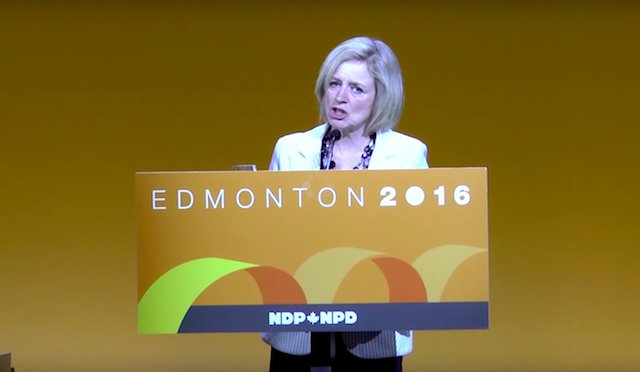 Edmonton – Dramatic accusations of “betrayal” spilled onto the floor of the NDP convention Saturday as Alberta New Democrats moved in to convince federal caucus members and party delegates not to endorse the Leap Manifesto.

The document, which is seen as a blueprint for renewal by many in the party after its crushing defeat in last year’s federal election, is up for debate today. It opposes new pipelines and calls for a rapid shift to clean energy infrastructure.

Alberta Environment Minister Shannon Phillips got in front of the debate about the manifesto prior to NDP Premier Rachel Notley’s speech to delegates Saturday by telling a gathering of the federal NDP caucus the document represents a “betrayal” of Albertans who voted for the NDP last year.

Speaking after the meeting, Phillips told this reporter that her province has the strongest climate change plan in the country – introduced last November – and that it intends to support new pipeline infrastructure that will allow its oil and gas industry to export its products.

“Alberta has the right to develop its resources,” says Phillips in an interview. “We don’t have anything to negotiate about that. We are who we are.”

The plea was embraced by some New Democrats, including the province’s only Alberta MP, Linda Duncan, a long-time environmental advocate, who thanked Phillips for making an “inspiring” speech to caucus members.

Duncan, who represents the federal riding of Edmonton-Strathcona, says the Leap Manifesto “is coming from people who aren’t exactly part of the party.” And says that opponents of oilsands development “need a wakeup call,” contending that shipping oil through pipelines is safer than by rail.

When Notley took the podium for her speech, she urged delegates from outside the province to remember the historic contributions Alberta has made to the rest of Canada. She told delegates that “the way to [help Alberta’s economy] is to build pipelines to tidewater that will allow us to diversify our markets and upgrade products here in Canada.”

Her remarks were met with sustained applause.

Notley encouraged the audience to “think more charitably about Albertans” as the province struggles to deal with the aftermath of the oil price crash that has seen unemployment hit a 20-year high and caused Alberta’s deficit projection for next year to double to more than $10 billion.

Notley stressed that Alberta would continue to produce oil at a “level of production that is responsibly allowed,” highlighting her government’s Alberta Climate Leadership Plan, which introduced carbon pricing, a cap on oil sands emissions, and plans to transition the province from coal-fired power plants to renewable energy and natural gas.

“We are acting on the basis of a concrete plan that is actually being implemented,” says Notley. “That is what you get to do when you move up from a manifesto to a principled, detailed plan that you can implement and help you win elections.”

The premier reminded NDP delegates not to be discouraged by last year’s election defeat. She says the Alberta NDP had been “written off” in the past and that if the NDP could win in Alberta, it could also win in any other part of the country.

Meanwhile, Avi Lewis, a co-author of the manifesto, said Friday that he and other members were still working to win over NDP delegates. He argues that Alberta is rich in solar, wind and geothermal resources and “should be spending money on becoming the superpower for the 21st-century not the 19th-century.”

He says it doesn’t make sense to build pipelines in Canada if the country is serious about tackling climate change.

“We have no choice, but to transition out of oil,” he says, pointing out the scientific consensus that Canada needs to be fossil-fuel free by 2050 if it wants to avoid the worst effects climate change.

But Liam Sparks-O’Neill, a delegate from Edmonton, says that adopting the manifesto would make New Democrats look like “liars” after the party spent two months trying to convince voters during the election that the NDP would not shut down the oilsands.

He says the manifesto is seen “as an attack on Alberta,” since it doesn’t single out auto manufacturers in Ontario for producing polluting cars, or the aluminium industry in Quebec, or the construction of the Site C hydroelectric project in British Columbia.

He says “many will be happy” if a resolution urging riding associations to study the document with the hope of adopting it as party policy in the future doesn’t pass.

Jose Morales, an NDP delegate from Saskatoon-Grasswood, adds that the Leap Manifesto is bringing many ideas to the table, and “we accept to discuss these ideas, but not to accept the manifesto right away.”

Phillips took to her Twitter account later Saturday to reject suggestions of a major division within the NDP, tweeting that it was nothing new for a provincial wing of the party to disagree with some policies at a federal convention.

But the convention is shaping up to be a major test for NDP leader Tom Mulcair, who faces a leadership review vote on Sunday.

Hassan Yussuff, president of the Canadian Labour Congress and supporter of the Leap, says “we find ourselves at a crossroad.”

Daniel Rodriguez is a Venezuelan-Canadian journalist who covers the business, politics, and energy beats. A slightly different version of this story appears at nationalobserver.com.