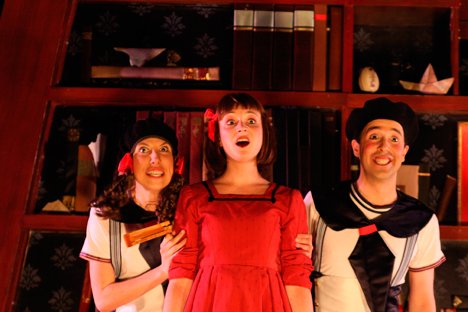 You don’t need to go to Burtonesque lengths to make Alice In Wonderland interesting, but Theatre Tout a Trac’s dreary adaptation of the classic stays safely on too familiar turf.

The compact Quebecois production introduces us to a bob-haired Alice (the charming, if one-note Valerie Deault), who hates her lessons (way to pander to the kids!) and only wants to party with her picture books. Following the anxious White Rabbit through Patrice Charbonneau-Brunelle’s multi-purpose library set, Alice finds herself in a world that’s disappointingly un-wondrous – for her and us both.

It’s peopled by the aggressive neurotics Tweedledee and Tweedledum and a sentient, pun-loving door, with puppets that pop from behind bookshelves and tomes that open to reveal worlds within – an appealing but worn-out celebration of reading and the imagination.

Hugo Belanger directs his own adaptation serviceably but without surprise. The aesthetic borrows heavily from familiar Alice imagery the purple Cheshire cat is lifted straight from Disney. Originally written in French, the English text befuddles, its cumbersome dialogue made all the more awkward in the mouths of the French cast. They try their best, but Maureen Labonte’s translation sags under all the laborious and expository wordplay.

Bright spots in the 55 minutes include Gabriel De Santis-Caron’s bumbling Humpty Dumpty and Marie-Eve Trudel’s hookah-smoking Caterpillar, both performers using some of the wittiest puppetry in the show. Also thrilling is the staging of Alice and the Snark Hunter’s sailing expedition, blue fabric rippling in luminous waves around their tiny vessel.

Lewis Carroll’s Wonderland was full of darkness and hallucinatory imagination, but Tout a Trac’s Alice explores a world that’s more dim than dark. This drop down the rabbit hole leaves you squarely above ground.