NOW MagazineNewsAll we are saying is bring our girls back

All we are saying is bring our girls back 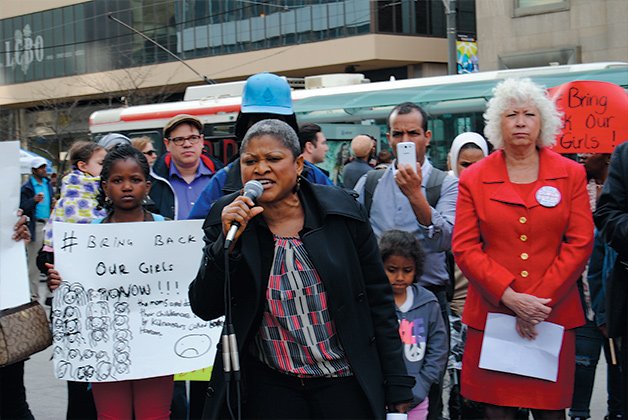 When Sonia Oduwa Aimiuwu calls out, “Bring back our girls!” her passion makes it sound as if they were her girls.

The Nigerian-born Canadian and her group, African Women Acting, have been organizing rallies in Toronto since more than 270 teenage girls were kidnapped a month ago by Boko Haram, a militarized Islamic terrorist group.

She says she feels responsible as a Nigerian woman to criticize the barbaric act.

“These are terrorists that have to be defeated,” she says.

At a rally on the weekend at Yonge-Dundas Square, demonstrators gathered to plead for the girls’ return in advance of Mother’s Day and sing protest songs.

One young Muslim man, Kareem Nur, took to the microphone to explain that the Islamic term “haram” means “something that is forbidden.”

After hearing the word used in relation to this mass abduction, he said, “I wanted to make absolutely clear that Islam had nothing to do with this.”

This isn’t the first time a radical Islamist terror group has attacked a school or girls seeking education. Countless young women across the Muslim world have been burned with acid, beaten and killed for going to school, according to human rights organizations.

After receiving death threats from the Taliban, Pakistani teenager Malala Yousafzai, an advocate for girls’ education, was shot in the head on her way home from school on October 9, 2012. After a miraculous, prolonged recovery, the 16-year-old remains an education activist, was nominated for the Nobel Peace Prize and has called for the release of her Nigerian sisters.

Her father, UN adviser on global education Ziauddin Yousafzai, says his family was shocked when they heard the news from Nigeria at their UK home. “I can tell you that the situation for the girls still held hostage by Boko Haram… I can tell you their situation is far worse than ours [was].”

When his daughter was fighting for her life, Yousafzai says, knowing she was injured was less painful than what the families in Nigeria have to deal with, not knowing what is happening to their girls.

“They are in a very unimaginably difficult situation.”

When considering the meaning of “Boko Haram,” he points out that the first word of the Qur’an is “iqra,” which means “read.”

He says he does not understand the distinction Boko Haram is making between Western and Eastern education.

When the West was in the Dark Ages, “in the Eastern world many scientists, many philosophers contributed to human history and civilization and knowledge,” he says.

He believes calling medical education or engineering Western implies that “we don’t cure our patients or we don’t build buildings in the East.”

As for the Nigerian girls’ education, some of the girls kidnapped from their dorm rooms on the night of April 14 have escaped, but they are afraid to return to school. The group has threatened to sell the girls who remain captive as wives (for $12), and has released video footage apparently showing the Christian girls praying, saying they have converted to Islam. In that 17-minute video, the leader of the group, Abubakar Shekau, asks the Nigerian government to release Boko Haram prisoners in exchange for the girls. That trade has so far been rejected by Nigerian president Goodluck Jonathan.

Boko Haram, which was formed in 2002, aims to establish a “pure” Islamic state ruled by sharia law. Seven years later it carried out a spate of attacks on police stations and government buildings. Although Nigerian forces killed founder Mohammed Yusuf, members regrouped under Shekau and have stepped up their insurgency, bombing churches, buses, bars, military barracks and the police and UN headquarters in Nigeria’s capital, Abuja. The U.S. declared Boko Haram a terrorist group in 2010. In May 2013, President Jonathan declared a state of emergency in the three northern states where the group is strongest.

According to the Nigerian government, Boko Haram was responsible for attacking a busy village market last week, killing up to 150 people.

As of Wednesday, May 14, U.S. surveillance and reconnaissance aircraft are flying over the northeastern part of the country in search of the girls. Military personnel from the UK, France and now Canada are on the ground.

Minister of Foreign Affairs John Baird was not available for an interview. Adam Hodge, a spokesperson for the minister, sent Baird’s comments by email: “There are Canadians who have arrived on the ground in Nigeria who are working with the United States and the United Kingdom to work on the freedom of the girls.”

To participate in the conversation, go to #BringBackOurGirls. See video from the rally.