NOW MagazineNewsAllowed in but not accepted

Allowed in but not accepted 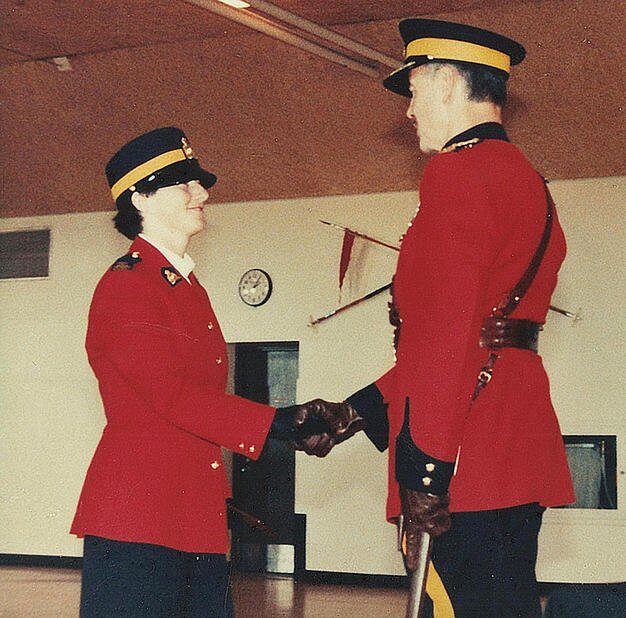 Janet Merlo on the day she received her badge. The former RCMP officer says when she was on the force

Janet Merlo, a former RCMP officer with 19 years’ service, is the lead plaintiff in a sexual harassment class action lawsuit against the Mounties that began certification hearings in Vancouver this week.

Merlo’s memoir, No One To Tell (Breakwater, $24.95), documents a long history of toxic workplace harassment, including an order to come to a supervisor’s office and stand next to a naked blow-up doll to see how she “measured up.”

As someone who did speak out against the daily grind of sexism, harassment and corruption she faced in the RCMP, Merlo found herself without backup during a dangerous call as punishment for opening her mouth.

“If you speak up, you’re just a ‘fucking woman with a big mouth,'” Merlo recalls over the phone from her home in Newfoundland. “One of the most frequently heard comments over the years was ‘Fuck 1974,'” the year women started being allowed into the RCMP.

Merlo started a private Facebook group that now includes scores of female officers and some male supporters. She was astonished to find how consistent the stories they shared are.

“One woman said when she went to her first detachment her nickname was DB2, and another woman who went in years later on the other side of the country was DB3 – dumb bitch.”

Since she left the force, Merlo has heard from many apologetic officers who failed to intervene on her behalf. “They couldn’t say anything because they wanted a promotion. Once you stand up for someone who is being bullied, you become a target yourself.”

While RCMP Commissioner Bob Paulson has talked about cultural change, current female members of the force tell Merlo it’s lip service. Under the 2013 Enhancing Royal Canadian Mounted Police Accountability Act, Mounties are prohibited from speaking out about issues within the force.

“So many women who want to take part in the lawsuit are afraid to talk because of fear of dismissal,” she says, which is why she hopes the Mounties will take a page from former Supreme Court Justice Marie Deschamps’s recent report on sexual violence in the Canadian Forces. Deschamps has recommended that the Forces set up an independent office to review sexual assault complaints, a strategy Merlo would like the RCMP to adopt.

“That would be a huge change. When I was with the RCMP, we were all suffering in silence because we had no one to talk to.”

Merlo recounts the example of four female officers in Nanaimo who complained to superiors about a certain officer and were told after an internal investigation that they “didn’t understand his sense of humour.”

While Merlo sees the Deschamps report as a catalyst for change in the RCMP, the Canadian military’s response has been lukewarm at best.

General Tom Lawson, who read the report before it was made public at the end of April, issued a February 25 direction to some two dozen top brass to effectively ignore Deschamps’s key recommendations and maintain the status quo, including on the question of an independent office to probe complaints.

Fallout from the public release of Lawson’s memo forced Defence Minister Jason Kenney into damage-control mode in the House of Commons on May 13, when he promised that an independent body would be set up to handle military misconduct complaints.

Whether Kenney’s pledge will translate into immediate action is debatable, since he declined to outline specifics or a timeline or any comment on what Deschamps called “an underlying sexualized culture… that is hostile to women and LGBTQ members, and conducive to more serious incidents of sexual harassment and assault.”

Lawson and Kenney, along with a silent Prime Minister Stephen Harper, also failed the sensitivity test when it came to one of Deschamps’s key findings: acknowledging that sexual misconduct is a real and serious problem.

“It is not enough to simply revise policies or to repeat the mantra of ‘zero tolerance,'” Deschamps writes in her report. “Leaders must acknowledge that sexual misconduct… requires their own direct and sustained attention.”

The military’s equivocation translates at the grunt level as a free pass for “boys will be boys” behaviour, something that one of Canada’s top sexual assault educators, Julie Lalonde, recently witnessed first-hand when she was invited to give a workshop at Kingston’s Royal Military College (RMC) for almost 1,000 officer cadets.

Lalonde, a respected writer, speaker and Governor General’s Award winner for her anti-violence work, speaks across the province on issues of consent and sexual violence. She felt hopeful because the October 2014 RMC invite was the first time she had seen a post-secondary institution mandate sexual assault education for all students.

But the sexualized culture identified by Deschamps was apparent the moment she arrived on campus. Addressing four separate classes of 250 cadets each (98 per cent of them male), Lalonde was met with howls of laughter when she began her presentation with the Criminal Code’s definition of consent.

Although the odd student apologized privately to Lalonde, and some offered backhanded advice, it was only during the final presentation of the day, when a high-ranking RMC official attended, that students calmed down.

“I have never had the level of resistance I had in that room,” says Lalonde, who was also told that her name had been googled and rape jokes made at her expense shortly before her arrival on campus.

She felt so threatened that by day’s end she requested an escort to her car. She arrived home to find her Twitter feed spammed with negative, threatening comments from clearly identified RMC cadets. At an unrelated speaking event three weeks later, Lalonde says someone approached her who identified himself as an RMC instructor whose students were angry at her. He menacingly informed her that he was following her on social media.

“There is this very clear message: they allow women, queer folks and people of colour in the military, but they don’t accept them,” Lalonde says. “There’s an attitude of ‘We’re letting you come here, but if we don’t like it, we will revoke that privilege.’ It’s a boys club in the truest sense of the word. So men will party and drink and go after women, and how dare you come in here and challenge the way we live? To be told that if I were a guy, people would have paid more attention tells me something about who they think has a voice and should be listened to.”

Lalonde did take heart that some students privately approached her to disclose harassment or say they felt supported by her presence. She also praises a lone man who confronted his fellow cadets and, begging pardon for his language, angrily called out, “The way that men talk about women at RMC is fucking disgusting.”

Lalonde received a letter of apology from RMC Commandant Brigadier-General Al Meinzinger in February, four months after the incident, that called the cadets’ behaviour “unprofessional.” Meinzinger wrote that “corrective measures were taken against the most difficult groups.”

Yet Lalonde’s going public about her RMC experience on the CBC only unleashed more hate mail.

She has also received an email from a rape survivor who was forced out of RMC. A sexual assault alleged to have occurred at RMC on May 13 is currently under investigation.