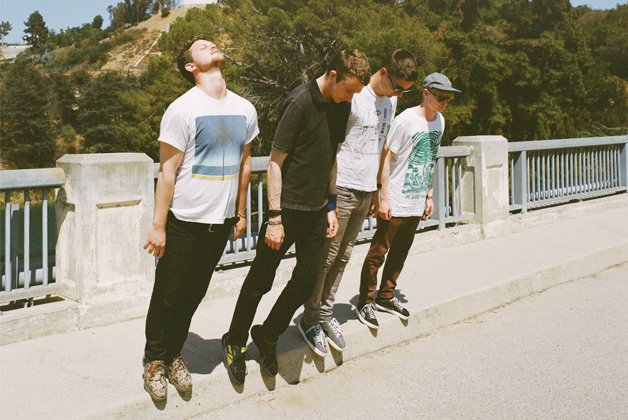 When I reach friendly Alt-J guitarist/bassist Gwil Sainsbury on a tour stop in Atlanta, it sounds like he and his bandmates are living the rock and roll dream.

“This morning we played Foals really loud in the venue and played football because the place is big enough to do that,” says Sainsbury. “Just having a massive P.A. and playing anything you want and just fucking around with a football – it was pretty good.”

It’s a nice pause in the whirlwind that the English four-piece’s lives have become since they released their debut album, An Awesome Wave (Infectious), last May. The album, which picked up the prestigious Mercury Prize and three Brit Award nominations, hasn’t even been out a year. “It feels like it’s been more like three,” Sainsbury says. Though excellent, it’s also utterly strange.

Joe Newman has a singing style all his own – quirky/creepy delivery, unpredictable melodies, impressionistic lyrics – and the music refuses to commit to a genre, shifting between intricate choirboy a cappellas and wordless instrumentals to beautifully layered folk and sputtering electronic indie rock. It all adds up to something wistful and beguiling.

Does its success make any sense to Alt-J, who formed in 2007 after meeting at Leeds University?

“No,” Sainsbury says with a laugh. “Beyond any sort of teenage dreams, I never really had much intention to be in a band. We wrote music in university and played a few shows. But then we finished school and it was a recession and we all did arts degrees, so we were pretty screwed in the job market. But the band was going really well, so we thought, ‘Let’s just give it a go.'”

They knew they wanted to release an album, and hoped a few blogs might take notice. “Maybe we’d tour the UK and a tiny bit of Europe,” he says. “I didn’t expect to be essentially going around the world with it. It’s completely exceeded anything I thought would come out of it.”

But while kicking soccer balls around arenas sounds like a sweet situation, the young musicians are also discovering a less attractive side to the teenage dream.

“Me and Gus [Unger-Hamilton] used to see bands at festivals and think, ‘Man, they are so lucky to get to go to festivals and hang out and see any band they want.’ But you drive in, pretty much at your set time, play, do some interviews, drive out. It’s such a different lifestyle than what you thought it would be.

“Essentially, any spare time you’ve got is wasted money because you’re still paying your crew and hotels but with no income. As a kid, you don’t realize that the music industry is a business. You always think bands just get to be bands. But they’re actually about balance sheets and Excel files.”