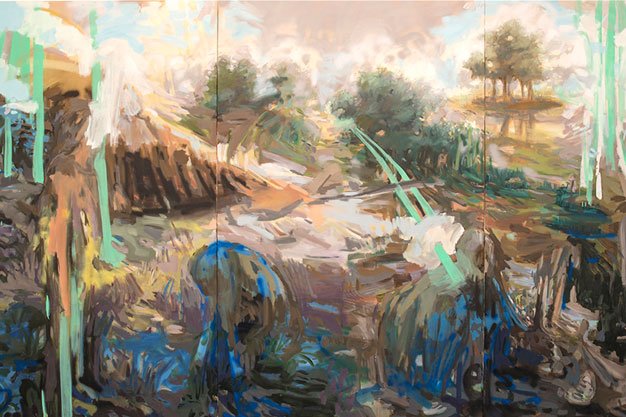 Canadian landscape painting, which has languished a little too reverently in the shadow of the Group of Seven, has seen some changes in the past decade. After the raw, thickly impastoed canvases of Kim Dorland gave the genre a needed kick, a new school seems to be emerging.

Inhabited, Stanzie Tooth’s stunning new show, is part of this wave. Tooth, a protege of Dorland’s and currently an MFA student at the University of Ottawa, is developing a vigorous, distinctive voice.

Part of her unique approach grows out of the idea that landscapes can be created not only through observation but through recollection. You could say that she thinks it’s all in the mind.

Mashing up media and at least four schools of painting, she pulls off an impressive unity.

Tooth’s preoccupation with landscape is in no small part the result of her childhood exploration of Canadian nature, as well as her ongoing dialogue with the history of painting in general. That would explain the intimate sense of solitary discovery radiating from her work.