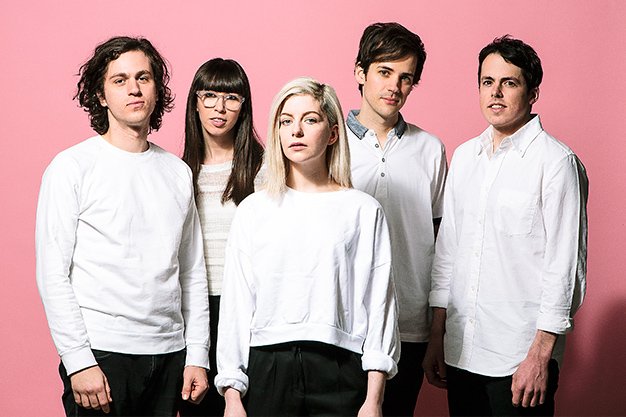 The day before I interview Molly Rankin and Alec O’Hanley, the principal members of Alvvays, I call my dad in Halifax. He’s from Inverness County in Cape Breton, where Rankin grew up.

He remembers the name of the dirt road where her family lived in Judique, a village of maybe 700. He remembers not only her father, John Morris of Celtic music legends the Rankin Family, but the day John Morris died.

“January 16, 2000,” he says. “Sunday morning. He was driving a Toyota truck that hit a salt pile on the road.” His voice is soft. “I still think of him all the time. One of the best piano players in Cape Breton. Anyway, tell Molly we know her family.”

So I tell Molly we know her family. It’s a good ice-breaker as we sit on a sofa in the Trinity Bellwoods apartment she shares with O’Hanley, who sits between us, rising intermittently to change a record.

That should make the wildfire success of Alvvays – the Toronto-based quintet whose debut album of fiercely yearning dream-pop hit number one on the U.S. college charts in August and who play a sold-out Massey Hall on Monday as openers for the Decemberists – all the more remarkable.

More remarkable still is the success Alvvays are finding beyond Canada and maintaining long after a buzz band’s typically brief peak-and-vanish cycle. The album’s got legs, expanding beyond college radio and onto Starbucks playlists and commercial radio stations, places few indie bands ever reach.

On the day we meet, the New Yorker has just published a write-up about their upcoming sold-out shows, replete with an illustration of a guitar-wielding Rankin leading the band onstage, striking in a skirt and with white-blond locks streaming.

On the couch, sipping homemade apple cider, the pair are friendly but deadpan about all the hubbub. They’re still recovering from a headlining tour of Europe and the UK, where visiting their ancestral Scotland was a highlight despite a bunch of Scottish dudes calling out to Rankin, “Marry me, Molly!” as she got onstage. (“I couldn’t even understand them,” she recalls. “They sounded like sheep!”)

O’Hanley is the band’s soft-spoken, articulate guitarist. “We were scared about Vienna on a Tuesday,” he says, “but it was ram-jammed. Zurich was great. Milan – a lot of fun. We feel spoiled rotten. But it’s been a long time coming. We’ve paid some dues.”

“Alec has done his fair share of Canadian touring in a minivan,” Rankin adds.

“Yeah, I did enough provincial purgatory for the both of us.”

O’Hanley formed power-pop band Two Hours Traffic in Charlottetown in 2000 with Liam Corcoran, and he stuck with it for over a decade. They were young musicians crafting exceptionally smart pop songs that, tragically, few people heard. When they broke up in 2013, they cited financial unsustainability as the chief reason.

So what’s different about Alvvays, another driven band crafting smart pop songs? How have they escaped that too common fate? Has being part of a powerhouse musical family been a help?

Rankin scoffs, recalling the time she turned down the East Coast Music Association’s last-minute request that she sing the Rankins’ hugely difficult Rise Again at its awards show after another singer cancelled. “I was rejected for everything I ever applied for after that. We’ve been exiled.”

Maybe Two Hours Traffic, a band she loved, were more of a “Canadian thing,” she ventures. O’Hanley notes the broader appeal of having women in a band. (In addition to Rankin, Alvvays includes fellow Cape Bretoner Kerri MacLellan on keys, plus bassist Brian Murphy and drummer Phil MacIsaac.) He speaks of Rankin’s knack for melody and wordplay, their devotion to finding good tone, refining song arrangements, thinking objectively so as to never get too self-indulgent.

“That’s been our MO for the longest time,” O’Hanley says, “just seriously scrutinizing what we’re putting out to make sure people will listen to it.”

Still, none of that explains some of the opportunities that have come their way. Like, how were they able to score a tour with Sweden’s Peter Bjorn and John when they only had Rankin’s 2010 solo EP to their name?

“Oh, that’s because our manager is crazy,” says Rankin. “Not crazy. But he never set any kind of cap on what he thought we could do. He got me a U.S. agent when I was still solo and didn’t even have a Canadian agent.”

And of course, Alvvays wouldn’t be going anywhere if their music weren’t excellent: bouncy tempos and melodic hooks set against an au courant blur of softly shoegaze keyboard-and-guitar textures. Rankin’s voice is light and inviting, her melodies hummable but wistful, her lyrics sardonic and defeated, often about love’s more unromantic aspects.

Her coolly detached demeanour plays a role, too, though it’s always come naturally to her. Once while she was performing with the Rankins in her late teens, an ensemble portrait was taken afterwards with Canadian songbird Anne Murray. Someone yelled out, “Smile, Molly!”

Rankin looks at me with a can-you-believe-it expression. “That was so weird that she would say that. It was so deep! She told me this profound thing about myself that I wasn’t even self-aware enough to realize at the time.”

And it’s true. Molly rarely smiles. It’s a quality that seems to speak to the weary melancholic undercurrent at work in her music. A quality that makes you return to the album often, gives its airy tendencies heft and keeps it resonating around the world.

Sadness, man. We can all relate to it. Small-towners who have had to leave home in order to make their lives happen. The grief that comes with losing family. In addition to her father, Molly lost her aunt Raylene, another core member of the Rankin Family, to breast cancer in 2012.

“I think I’ve always been in this sort of grey state…,” she admits. “I have moments when I’m a little sillier. But the majority of time is spent in this layer of sadness. I think it’s pretty common for the climate we live in. A lot of people are depressed. But, yeah, maybe it started when shit hit the fan with my family. I was in Grade 7 when my dad died, a time when I was becoming more of an adult.” She trails off. “There’s been a lot of death.”

And that’s how we get some genuinely bittersweet pop. Sunny, beachy sounds disguising wary-hearted narratives and keeping memories at bay. Despite having little time off, the band has started demoing new songs for the anticipated follow-up, which they plan to record in a Toronto studio with a tape machine like the one they used at Chad VanGaalen’s Calgary studio for the debut.

But first they’ve got Massey. And an American tour. And three shows at WayHome in July. And then a UK tour in early fall.

“That was great. Finding out about [Murdoch’s fandom] was one of those moments that make you happy for 20 minutes,” O’Hanley says.

And then she smiles.