"There was so much shame attached to food for me. So unabashedly eating food, taking pictures of us doing it, being in public and eating all of these things that were taboo - the logical extension of that is feminism." - Yuli Scheidt 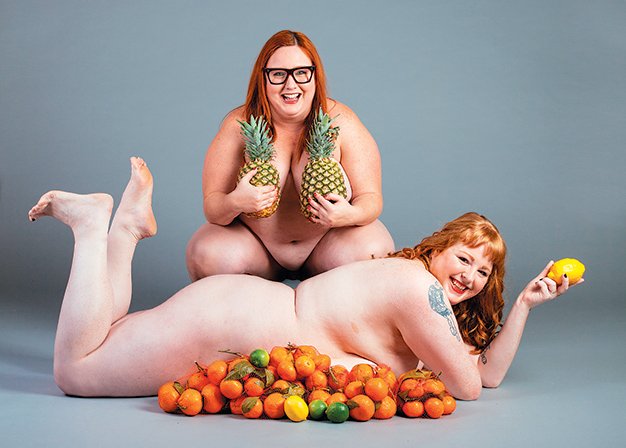 We started the blog because we really wanted to empower other women who were much like ourselves. As a writer/photographer duo going out to events, we didn’t find anybody like ourselves, two fat women, going to food and fashion events. We were these two fat bitches hanging on to each other, being like, “We don’t fit in here at all, and this is really awkward.”

I’ve had a lot of things happen in my life: I dealt with drug and alcohol problems when I was younger I’ve had family issues. As I grew older, I realized that being surrounded by so much negativity didn’t help me progress and didn’t let me do the things I wanted to do. So as I started to eliminate those negative things from my life – which sounds so much like The Secret – and started bringing in positive people, things started getting better.

I’ve always been pretty chill with my body. I think if I could be naked all the time, I would. So one of the big things I started doing when we started the blog was I took a lot of body-positive self-awareness classes to sort of become one with my body. You’re in a dark room with the door locked with about 10 girls, and you’re all naked, and you do trust exercises with everybody. You have to share different things with one another about yourself and your body.

My body used to be thinner because I was always on a lot of drugs. So I never knew my body to be of size. But I’m happy now, in a more peaceful place. I know who I am and I know where I’m at, and I feel like I’m really figuring out who I am as a person.

I feel like a fraud because I don’t come to feminism from an academic arena, but from being raised by women who were obviously feminists but would never say it.

There was so much shame attached to food for me. So unabashedly eating food, taking pictures of us doing it, being in public and eating all of these things that were taboo – the logical extension of that is feminism.

It’s kind of our three Fs: fat, food and feminism, and the intersection between those things. I literally sat down one night and just started the blog, because we had been using #fatgirlfoodsquad as, like, a funny hashtag on Instagram.

The blog has created this in-real-life community as well as online. We try hard to connect with people who reach out to us. And that was maybe one of our secondary intentions with starting the blog: to hang out with people like us and be seen. Just the presence of 10 fat girls having a great time is very powerful for the people involved and the people around. It’s exposure: you don’t often see someone like me represented in any kind of visual communication or media. So just being comfortable and out – like, “Ama is just chowin’ down on this thing. I guess it’s okay for me to eat in public.”

A lot of people started approaching me to do projects with them, so I posed for Worn Fashion Journal in my underwear. Subsequently, a designer asked me to walk a runway show. That was exhilarating, and I think I might have been the only truly plus-size model. There were heavier girls, but, like, I’m 300 pounds and 6 feet tall. In the fashion industry, that’s huge.